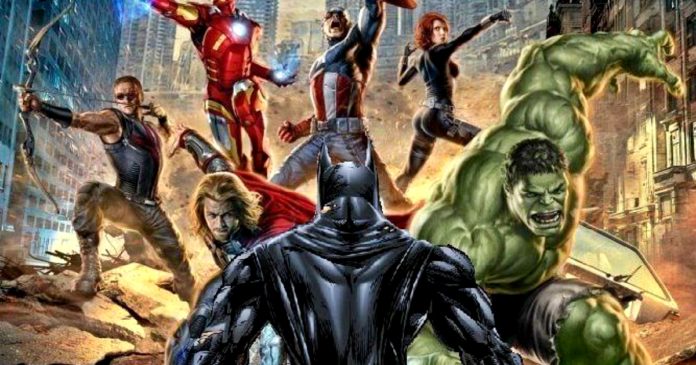 Batman doesn’t have any superpowers, but, he is not lacking in fame as a top superhero in the DC Universe.  Batman has a fantastic mind, combat expertise, and a wide range of gadgets. Using these talents, he has time and again proved that he is not only capable of taking down super villains, but, at times even his Justice League colleagues too. While the fan debates about what will be the outcome of Batman’s battle with Superman (a battle that has already been seen to some extent in Batman v Superman: Dawn of Justice), there is one battle that not too many people have thought about. This is the battle between Batman and The Avengers. 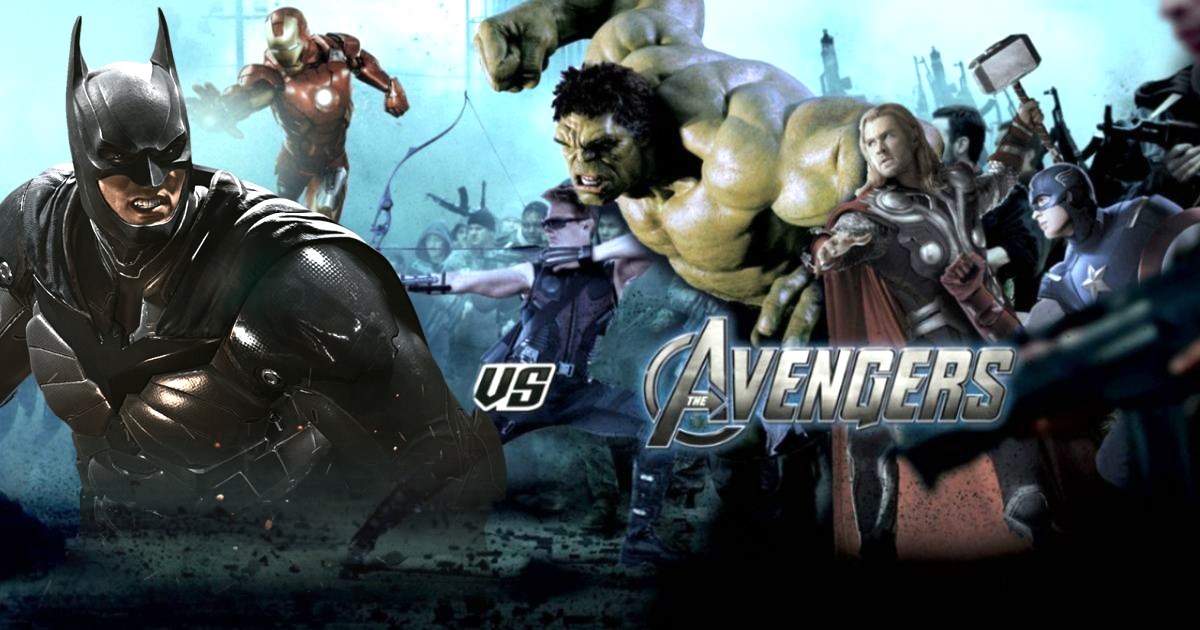 The screenwriter, Max Landis gave it a thought, and he worked out how Batman could defeat the Earth’s Mightiest Heroes.

The Chronicle writer used Twitter to explain how he believes, Batman could overcome the Avengers in the confines of a city. The start of the battle will see Batman use a tranquiliser to put Bruce Banner out before giving him a chance to turn into the raging monster. He would then go on to hack Iron-Man’s suit and use an EMP to overcome Vision. Thor would get  “Batwing’d into a building and then glued down with polymer.” He is good enough with combat skills to handle Black Widow and Hawkeye, and the only warrior left will be Captain America. Landis says that Captain would be a difficult opponent, but, Bruce will manage to beat him. He also said that Batman fighting these heroes would be a great situation since “he wouldn’t be able to use the city against them as effectively.” 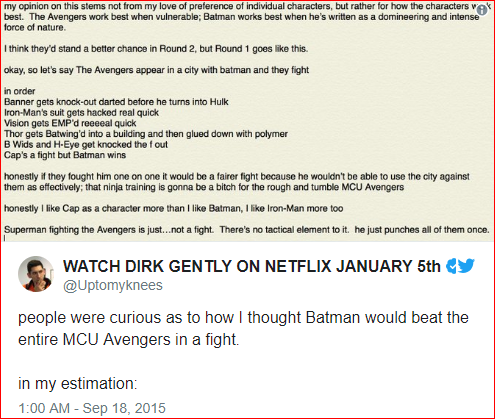 The entire theory written by Landis is shared below:

There is no doubt that Landis’ theory is fascinating, but, it is exaggerated. We have no doubt about Batman being a fantastic vigilante, but, in this case, it seems as if he is Bat-God and not Batman. Landis knows that Batman’s biggest ability is to be  “domineering and intense force of nature” but, we must not forget that the Avengers relish a challenge, and that is why this approach which seems to be prejudiced in favour of Batman, is unlike an actual battle. We agree that Batman is a smart guy, but, we would be fooling ourselves if we consider Avengers to be sitting ducks. He is unlikely to walk over them and execute his plans while facing the might of The Avengers.

Landis has also failed to properly evaluate the combat prowess of Black Widow and Hawkeye. They might not be Batman’s equivalent individually, but, it is not as if they would be flattened by the Dark Knight. Tony Stark’s wit is no less than even Bruce Wayne, and everyone knows the expertise Steve Rogers has when it comes to strategy. Why would you assume that these two won’t have a plan ready when the Gotham City’s vigilante comes calling? 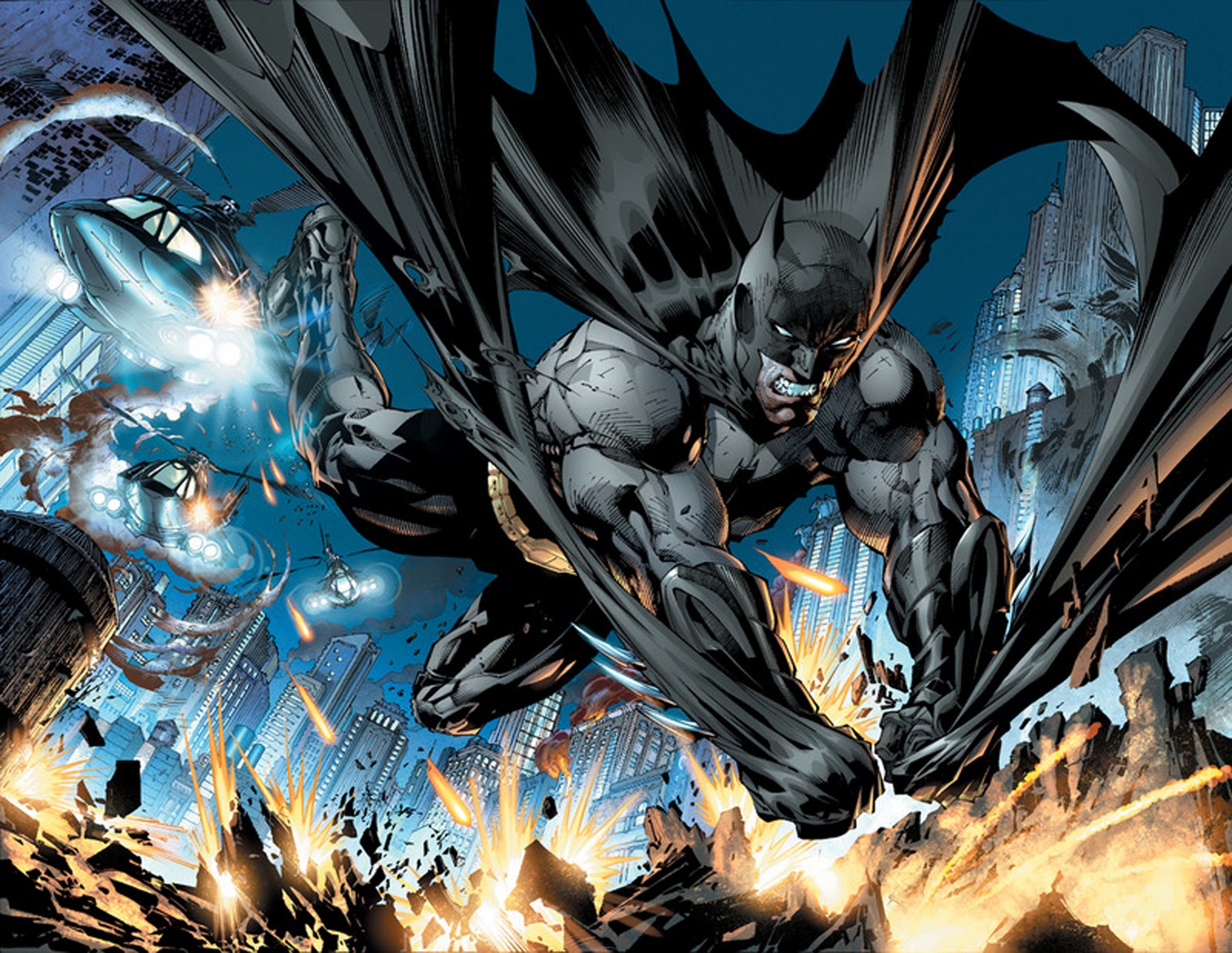 There has never been an actual Batman vs. Avengers battle, but, we have seen Batman fight with a Marvel hero. There was a comic book crossover during the 1990s, and Batman had successfully fought Captain America (the winner was decided by fan votes). However, they soon joined the other Marvel and DC heroes. Batman has also teamed up with the web-slinger and Daredevil in other crossover stories, but, they never fought with each other.

The chances of such a fight don’t exist, therefore, this is one subject that will always remain confined to fan fantasies. However, if you wish to take a look at Batman’s chances against Superman, then you can watch Batman v Superman: Dawn of Justice! 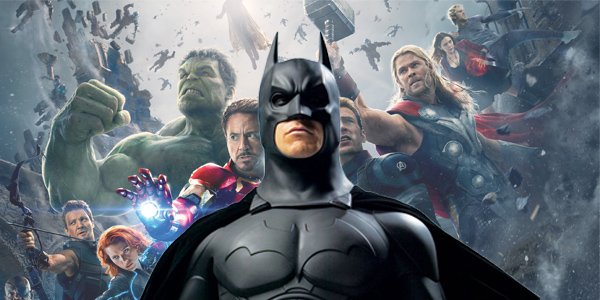