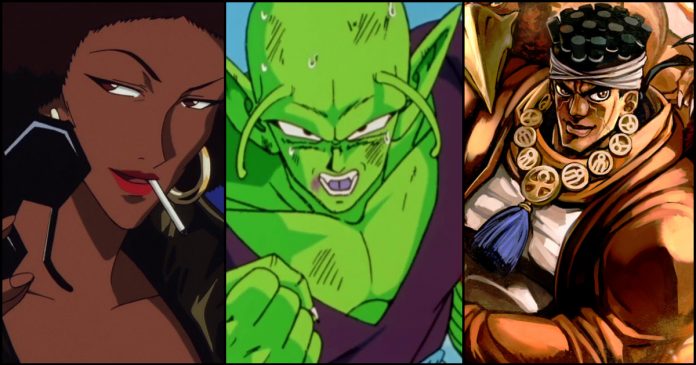 When we speak of anime in general, black characters do not really come to mind. But with time anime has evolved and has started integrating more diversity into the characters. Now, we often see a black character taking over a central role in some anime and also being the pivotal character. Not only has it made anime culturally diverse, it is also influencing a significant black population around the world to watch anime. We have prepared a list of some of the most iconic black anime characters that we can think of. The list is certainly not exhaustive but these are among the most popular characters that the world of anime has experienced. 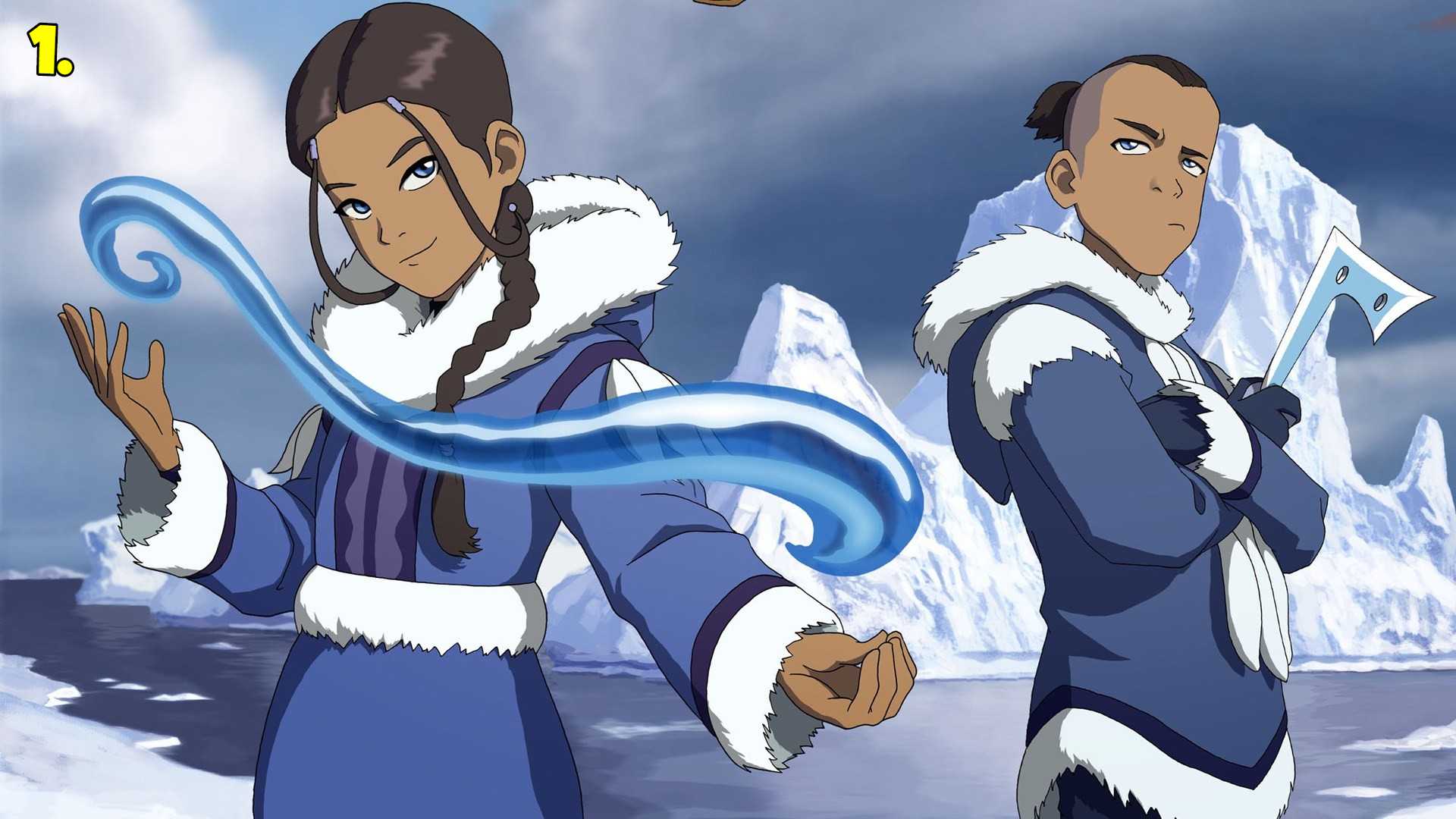 The anime titled Avatar cannot be imagined without the powerful presence of this strong character named Katara. She is like the female lead in the anime and has a significant role throughout the series. She has powers like waterbending and happens to be a waterbending master. Besides her powers, her gentle heart and motherly affections make her a loved character. She is also the teacher for Aang in this anime and there are several fans of Katara for all her qualities. 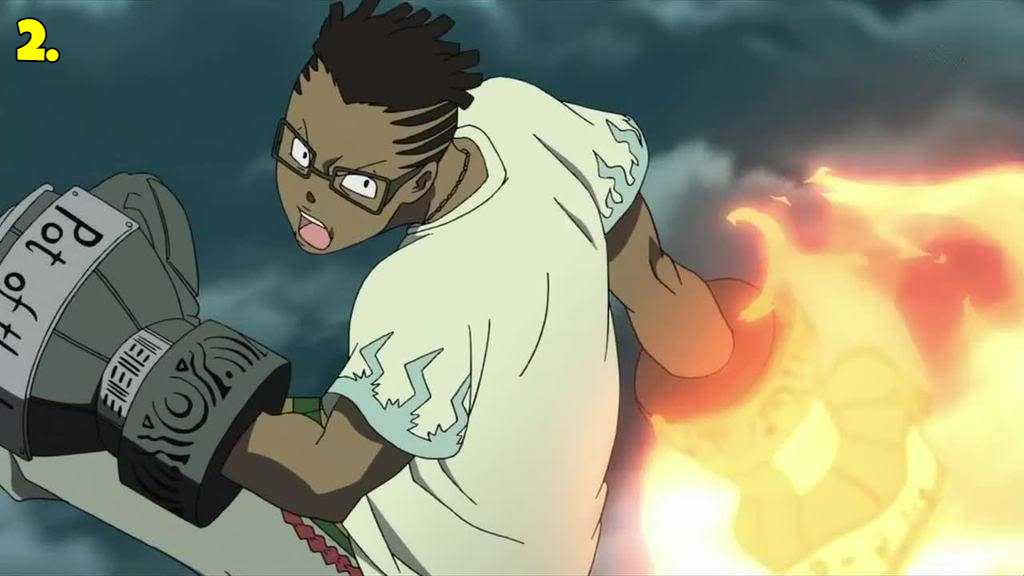 He is a unique character and also one of the most versatile individuals in the anime Soul Eater. In his class, he is among the best performers and when it comes to style, Kilik has his own signature style where he wears his weapon partners as a gauntlet on his head. His weapon partners include the pot of thunder and the pot of fire. Among his many qualities, his attitude of never giving up and his fighting spirit is admired by his fans.

3. April in Darker than Black 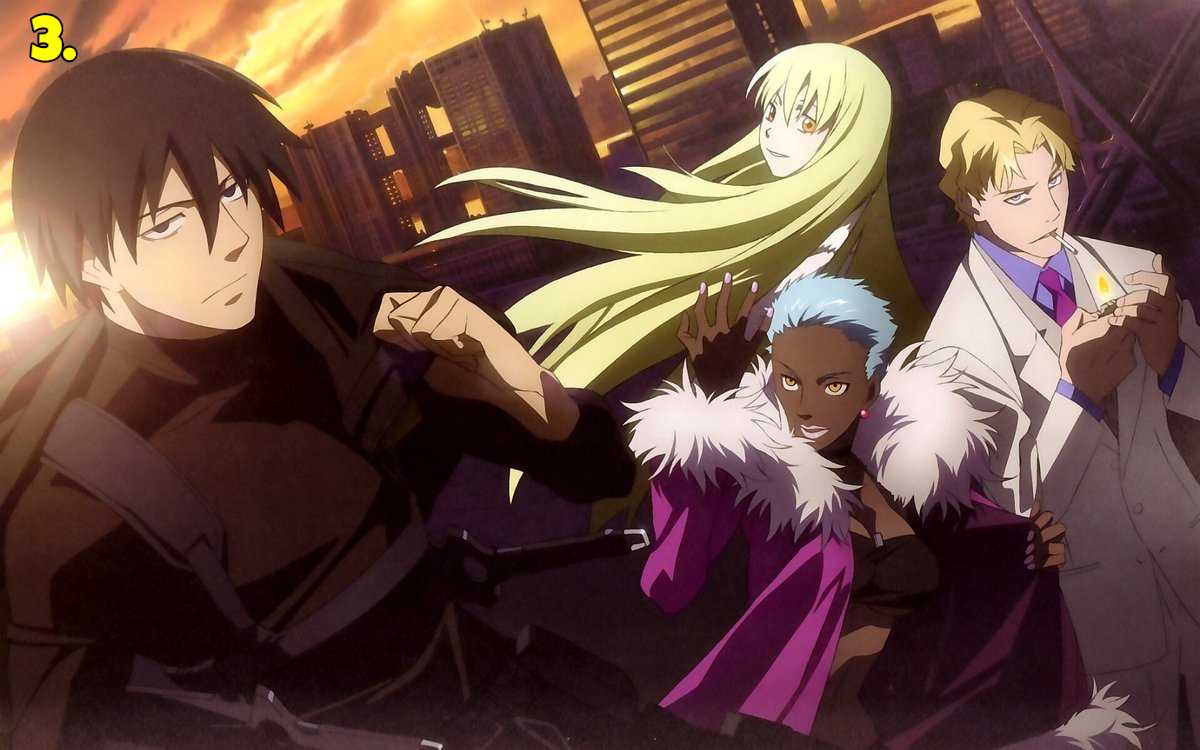 She is quite a character and makes her presence felt with her strong personality. April is the hurricane maker and happens to be a powerful individual. She is also a heavy drinker and a witty character. She was contracted by the famous intelligence services from Britain and she has a distinct appearance that defines her. You would always see her in her purple coat where the fur around her neck makes for a pleasant stylish look. 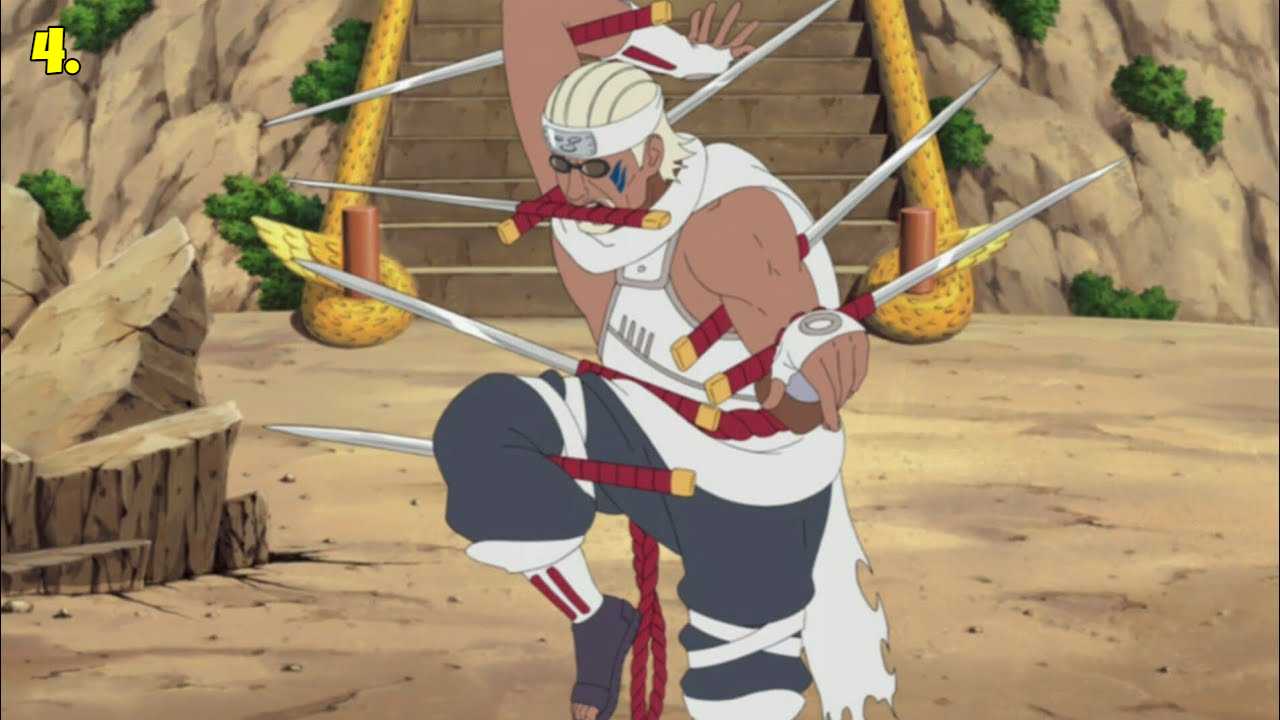 The Shinobi forces in this anime never saw a more powerful and gallant warrior than Killer Bee. He was also the supreme leader of the Shinobi allied forces for his bravery and gallantry. He is extremely strong and what makes him lethal is the fact that he is fast as well. His blonde hair is parted and he has a strong built which instills faith in his powers. His lighting chakra abilities make him the invincible character that he is and the fans of this anime adore him for all his qualities.

5. Darui from the anime Naruto 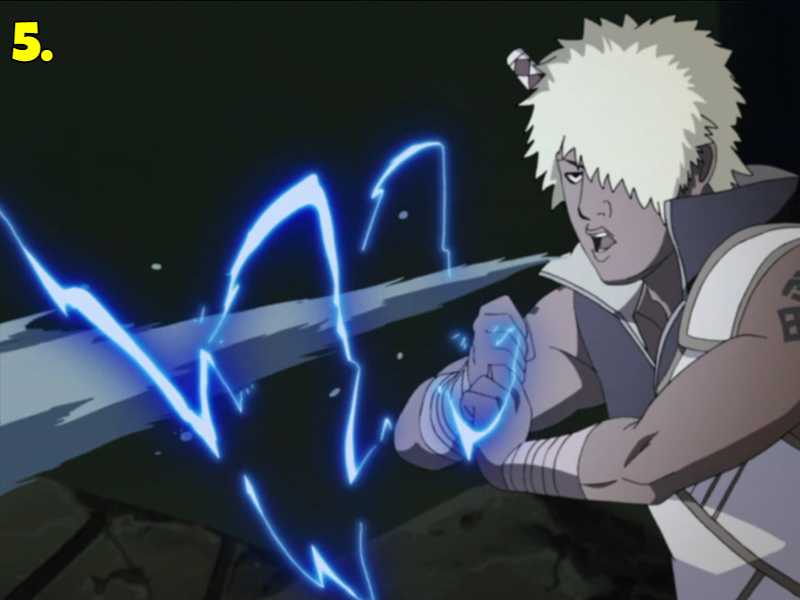 He has an appearance that inspires faith in his character. This tall and lanky character from Naruto has beautiful blonde hair complimenting his strong build and his abilities too, are impressive. Among his several powers, he can align his chakras and that helps him to emit light and build his components temporarily. Darui is surely going to mesmerize you with his remarkable characteristic traits and it is no surprise thus, that he finds a mention among the top five dark characters in anime. 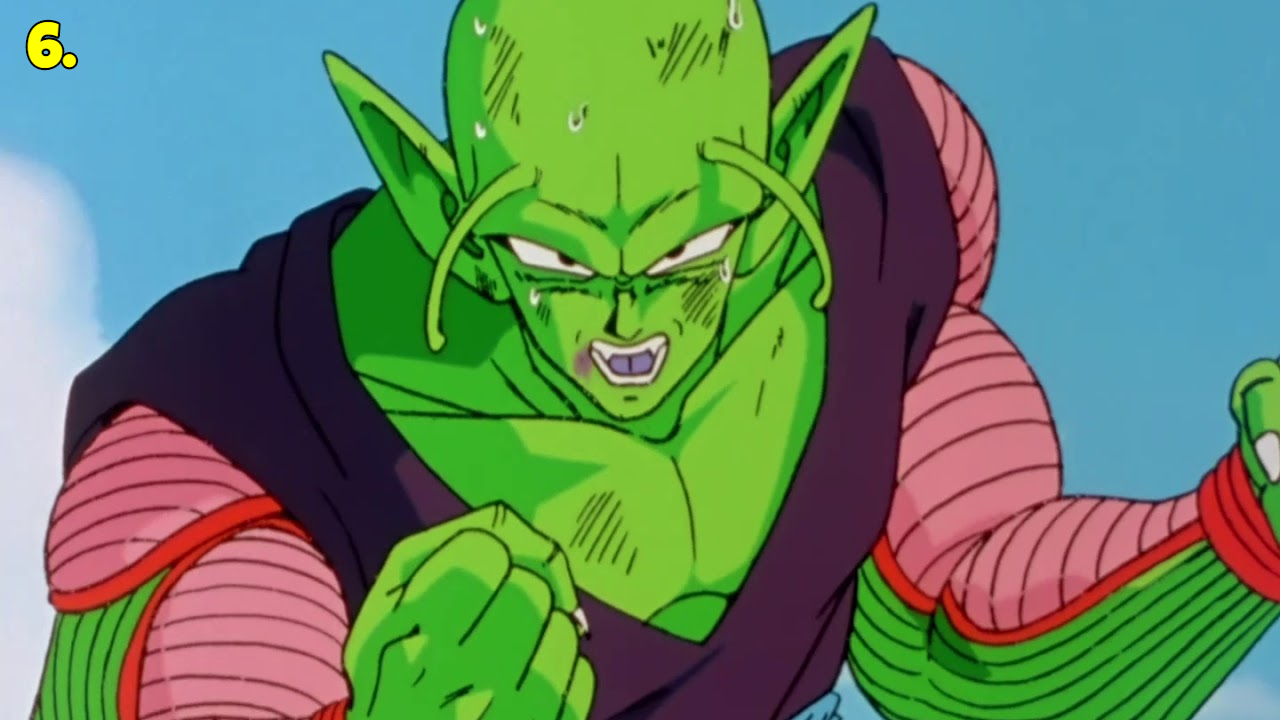 We all love the characters who make the transition from being the anti-hero to a hero. Piccolo is precisely about that as he starts off as an antagonist and soon wins the hearts of the Dragon Ball fans with his character transformation. Given that this anime is extremely popular and Piccolo is one of the most loved characters of the show, it also makes him one of the most adored characters ever in the world of anime.

7. Kuzan aka Aokiji from the anime One Piece 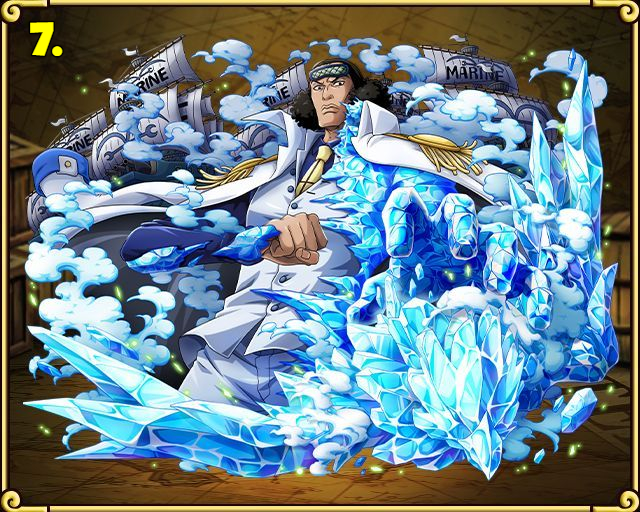 The character of Kuzan aka Aokiji is a colorful character who displays several personality traits as the show goes on. He is one of the important members of the Blackbeard Pirates and his laidback attitude often induces a laugh or two. He is, however, extremely skillful and powerful although people often tend to overlook it because of his overall presentation. He portrays his calm side most of the time and people are in awe of this remarkable personality. 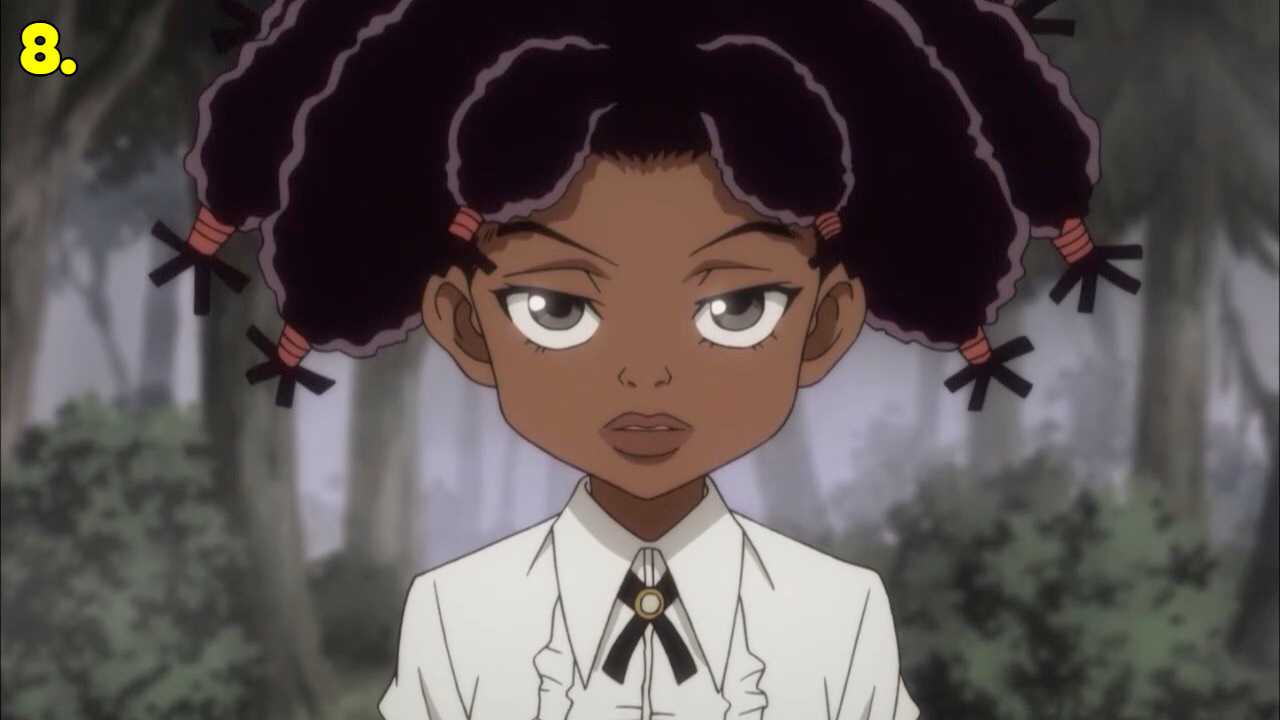 We see Canary in Zoldyck Mansion where she is tasked to guard the mansion. While she might not seem like the most intimidating guard, she does prove her powers when it came to a face-off between her and Gon. Besides her strength and fierce character, Canary is also a soft-hearted lady with feelings for Killua. She is extremely professional with her tasks and is loved for her fearless attitude and fighting spirit. 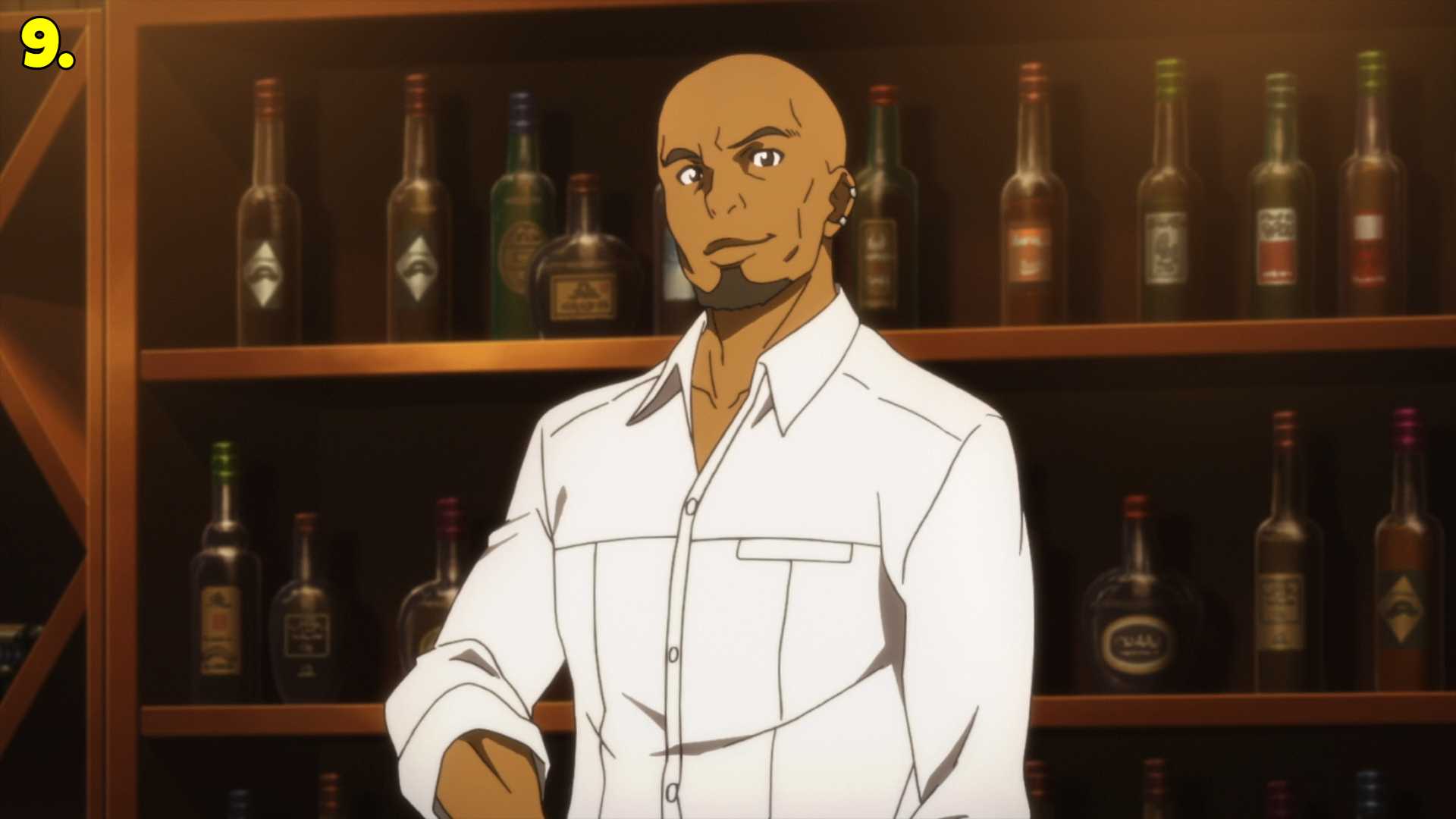 Who would not be in love with a character who specializes in making weapons and is a lethal warrior with an axe in hand? This character has such traits and is thus one of the most favorite characters in the show. Despite such powers, this is a kind and friendly character who is willing to help the other players at all times. He is so kind that he even spends his own money to help out others. It is thus no surprise that he finds himself in the list of some of the most iconic black anime characters. 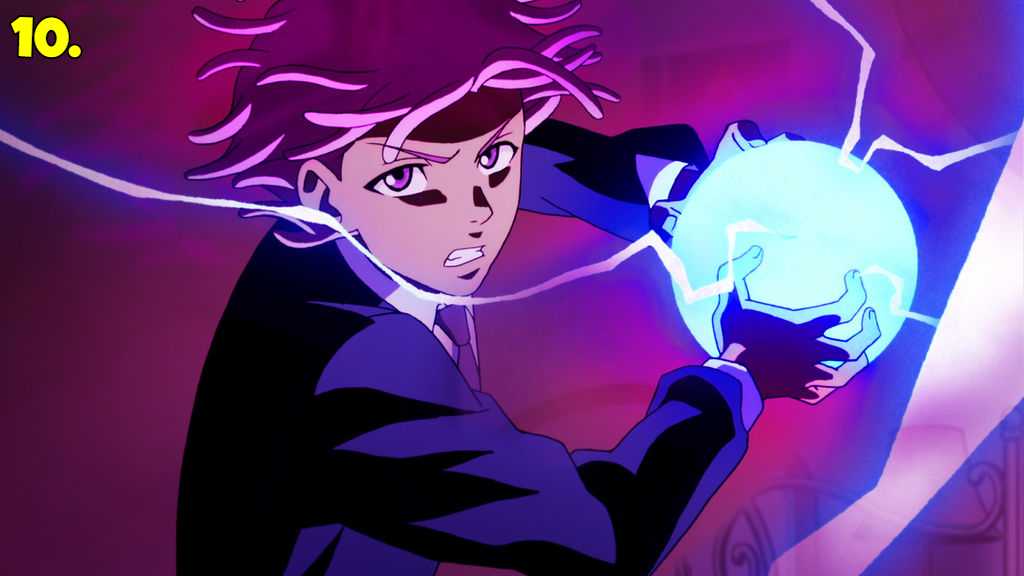 Neo Yokio is a Netflix original production and naturally has a certain amount of craze associated with it. The character of Kaz Kaan is iconic in more ways than one and the voiceover for the character has been done by none other than Jaden Smith. He is fearless and battles it out with the demons and the ghosts. But besides his strong character and spunk, there is also a side to him where he is constantly in doubt over what others think of him. Kaz Kaan is a well-rounded character and some of his traits are very relatable. 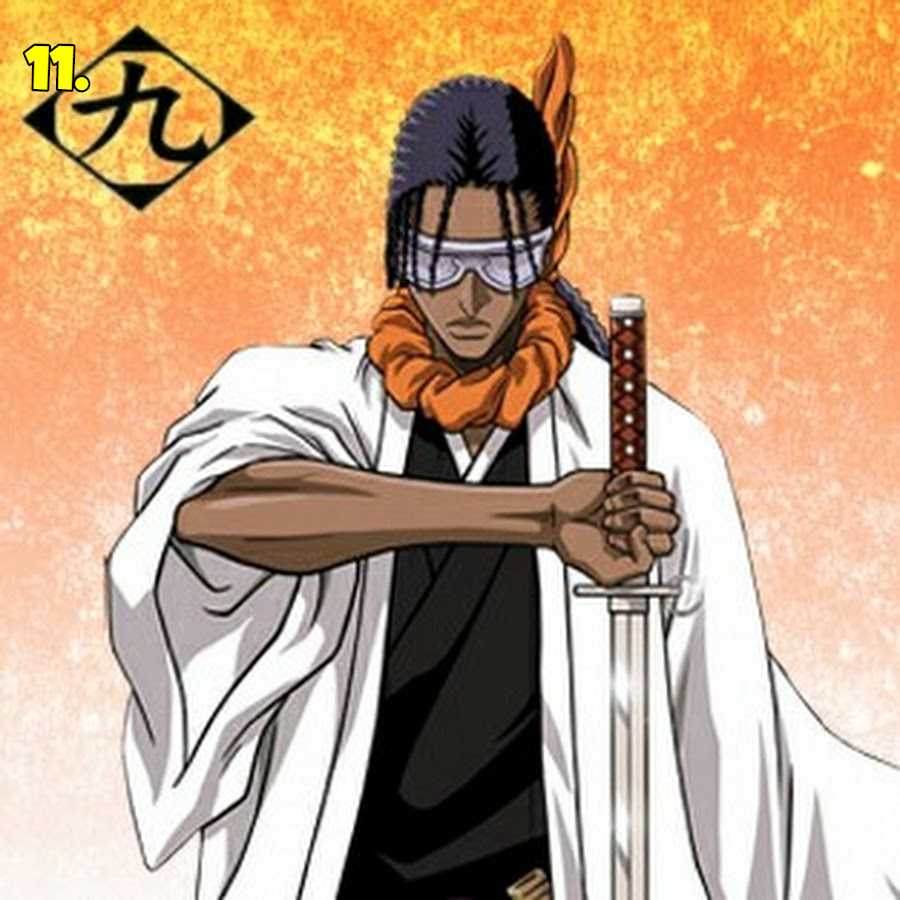 Not all the iconic characters bear heroic traits and Kaname Tosen is one among the perfect antagonists. He is a villain in Bleach who is admired for his style and attitude. The long braids of hair, pupil-less eyes, all add up to a character who is easily identified as the bad-guy in the show. If anti-heroes are your thing, Kaname Tosen is the character to look out for. He makes the experience of watching this anime much more fun with his presence. 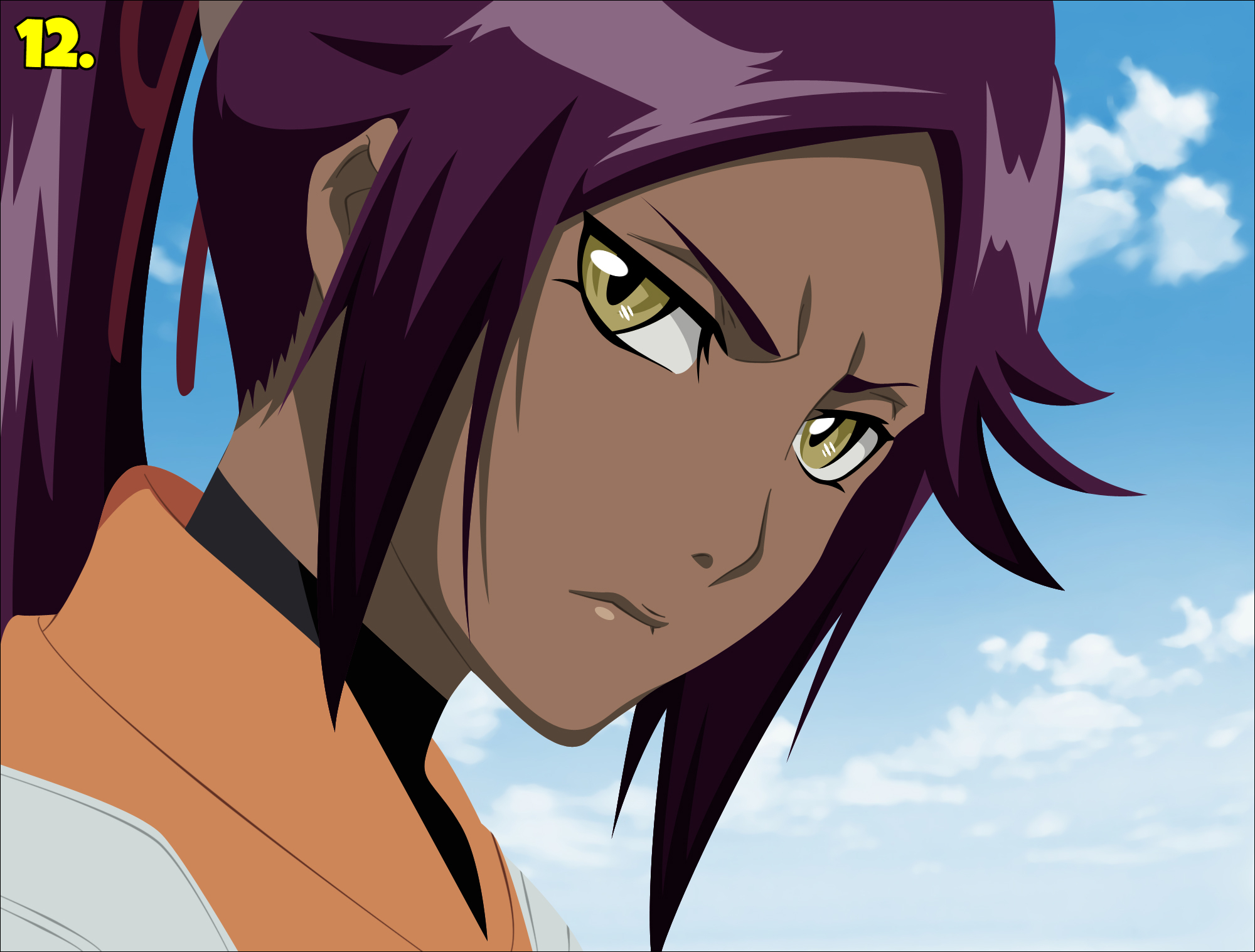 This is another iconic character from the popular anime titled Bleach. She has some unique powers such as her ability to transform into a cat. After she changes into a black cat, she stays like that for fairly long time periods. As a former leader of Onmitsukido, she is a character with a lot of determination and spunk. She also has a noble lineage and her actions are in line with her rich heritage.

13. Atsuko Jackson in Michiko to Hatchin 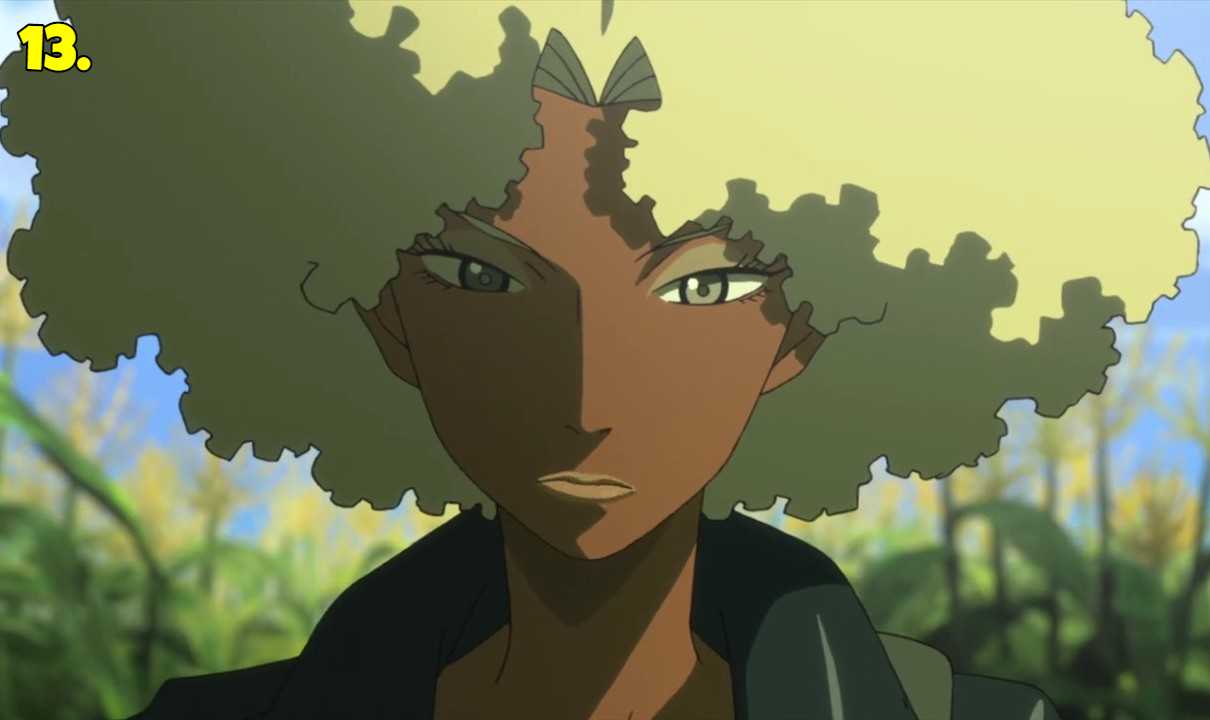 He is one of the determined cops whom the fans admire for his bravery. His mission to catch the absconding Michiko is what forms the crux of the story and his several encounters with action prove his mettle as a deserving cop. While the two protagonists are so differently placed, they did grow up together at the same orphanage and that adds some complex emotions in their equation. His presence makes this anime all the more interesting.

14. Huey and Riley Freeman from the anime Boondocks 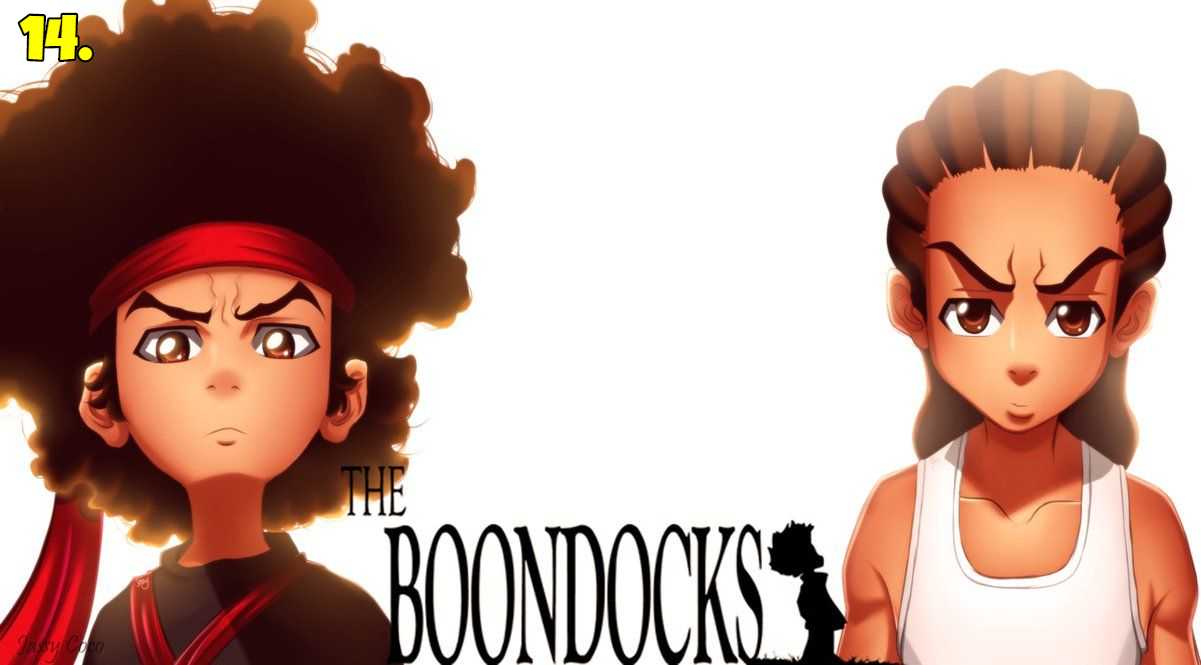 These are two brothers and they each have their own uniqueness that they bring to the show. While Huey is the flamboyant of the two and has some of the best comebacks, Riley is not the best of talkers. Huey also displays some fine martial art skills and despite the glaring differences between them, they work as a team and look out for each other. These are two characters you cannot miss when you watch this anime.

This is an anime which is more of an acquired taste. It starts off slow and soon picks up pace and the introduction of the character of Muhammed Avdol only adds to the glamour of the show. He is a logical and rational person who always speaks with reason and purpose. He is a fortune teller and is a reliable character. His unique hairstyle is also appreciated by the fans of the show. 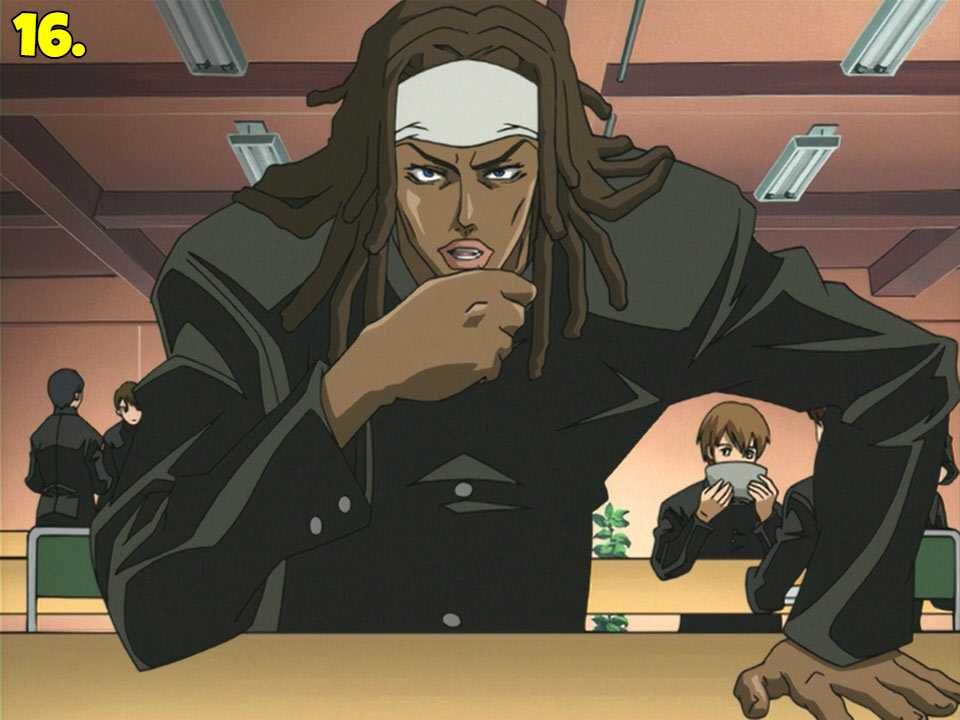 Many are of the opinion that this character has a strong resemblance to the iconic Bob Marley. Irrespective of that, Bob Makihara is a charming character from the anime with a strong personality. He is a member of the Juken club and although he is extremely good, he is never satisfied and continuously strives for excellence. As for his appearance, Bob has tall and lanky features with long flowing hair which adds to his style. 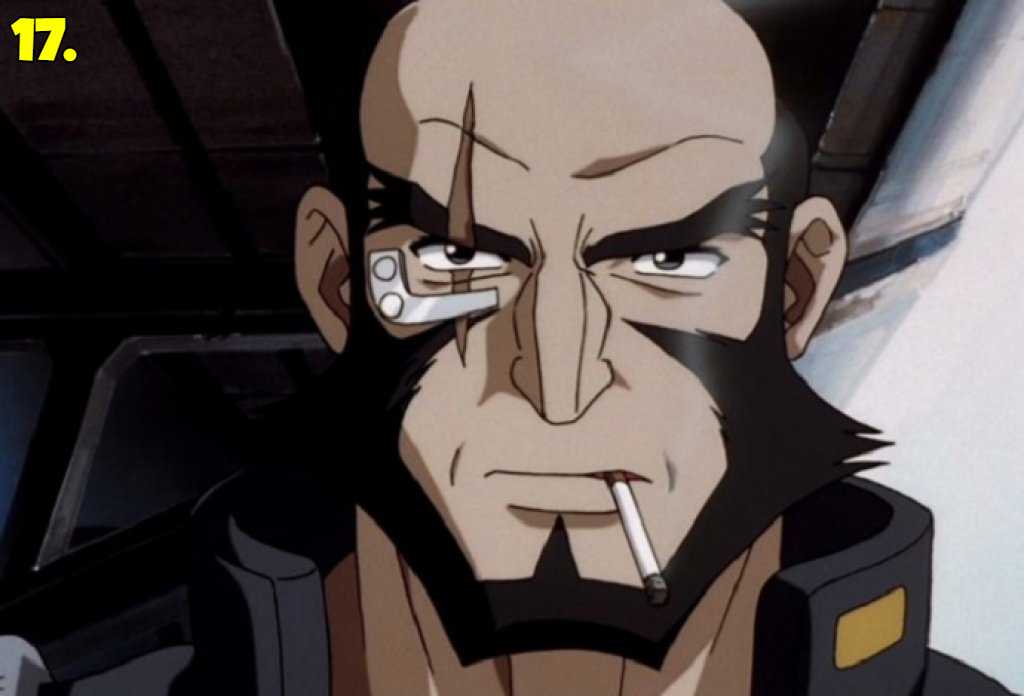 His semi-bald head and charming personality makes him a loveable character from the show. He used to be a cop and now he is a bounty hunter with all the style in the world. He is heavily built and has a robotic prosthetic arm although that is no hindrance to his abilities. Among the other bounty hunters, Jet Black is the deadliest although the other aspects of his character manage to shift the focus from his ruthless side. 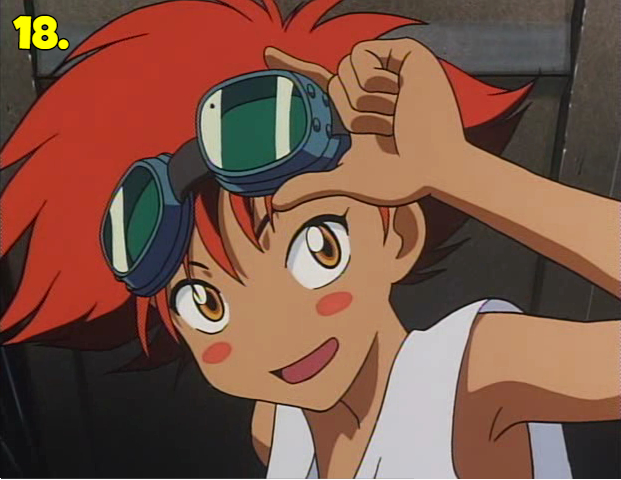 This is one of the mystical dark anime characters who are not the most social person. However, she makes up for her social awkwardness with brilliant hacking abilities and even manages to hack the Jet’s ship Bepop. The bounty hunter squad loves her as their own sister and she is pampered and nurtured by them. She does manage to irk someone every now and then but during the times of crisis, she is the one who manages to avert the disaster. 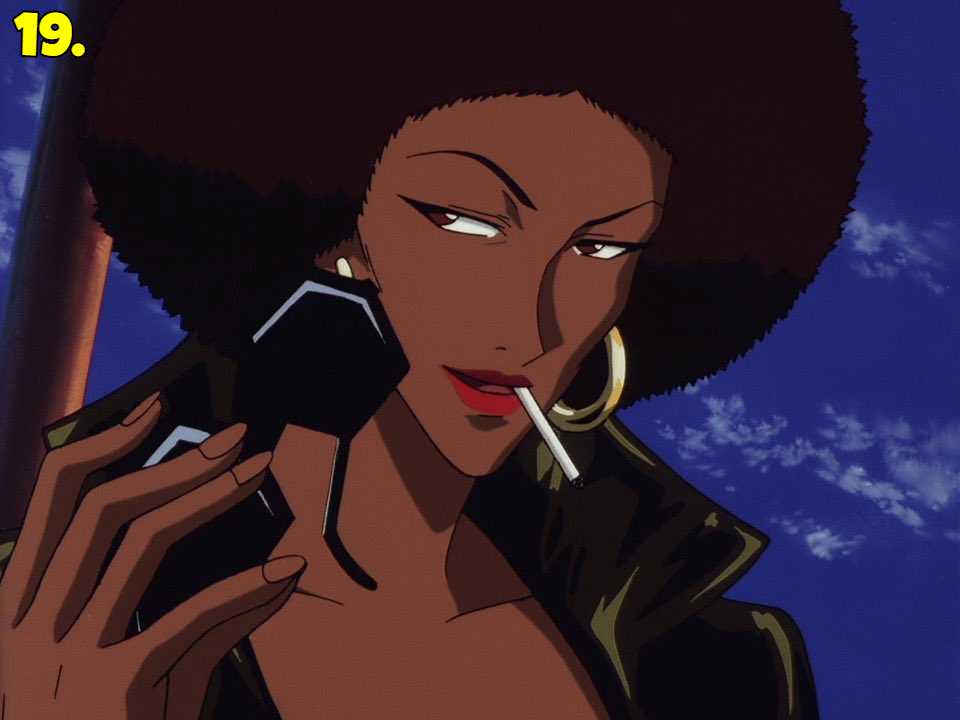 Cowboy Bepop is one such anime that has a lot of characters who are black. Kofi is another of them and although she arrives in a minor role, she still makes a lasting impression. Kofi is first seen on the 17th episode of the anime and soon she impresses the fans with her impressive fro and strong character. Even in a small role, this character does not fail to impress the viewers. 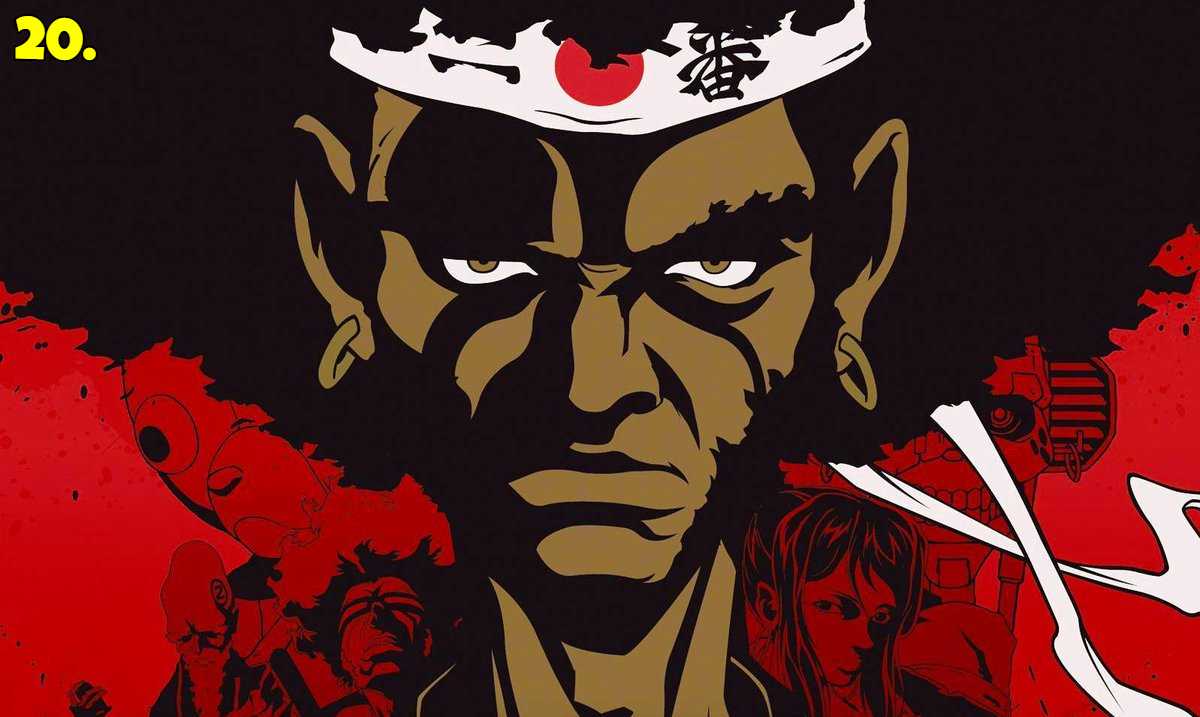 The mission that Afro has undertaken involves a gruesome revenge which he seeks from the samurais. He has a companion in the process and with voiceovers from the likes of Samuel L Jackson, these characters have earned their special space in the anime world. Afro is incredible with a sword in his hand and there is hardly any match for his battle abilities. His companion named Ninja Ninja is no less and they make an amazing pair which the audiences love to see. 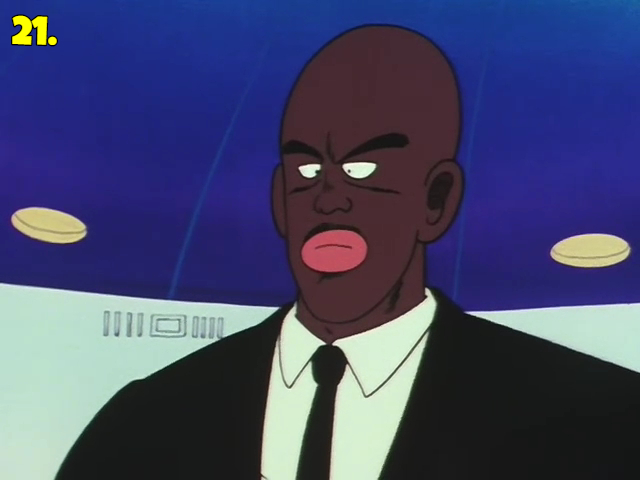 He may be a character who is second in command but he manages to impress with his abilities to carry out the orders perfectly. Officer Black is a member of the Red Ribbon Army and reports directly to Officer Red. There are several instances of his gallantry and bravery and despite not being the protagonist, this character is loved and admired by thousands of anime lovers.

Sol Marron is a brave female warrior who has some extraordinary characteristic traits which makes her loved by all her fans. She protects her captain to the best of her abilities and is not particularly fond of men. She dresses up boldly and when it comes to hurting women, she carefully avoids doing so. Sol Marron is a tall lady with beautiful green eyes which compliments her beauty and she is one of those anime characters who are underrated despite their brilliance.