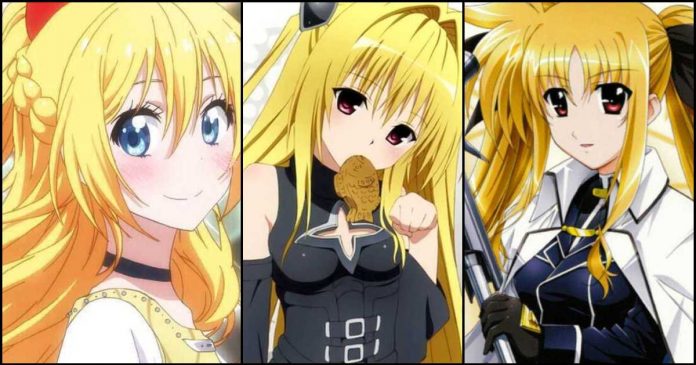 1. Mashiro Shiina from The Pet Girl of Sakurasou 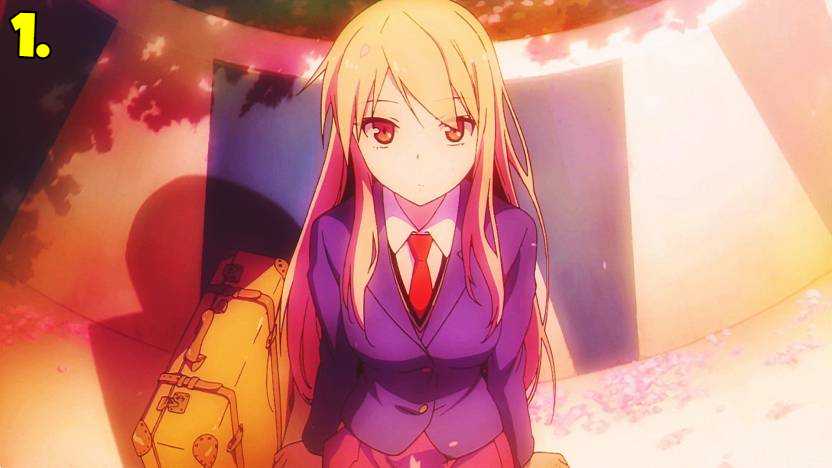 This is one of the most unique blonde girl characters in the world of anime. While many take offense to the stereotype of a dumb blonde girl, Mashiro Shiina is actually one from that category and is incredibly stupid. However, she is an incredible artist and her drawing skill almost makes up for her shortcomings when it comes to intelligence. Despite the stupidity of this character, it is much loved and adored by the fans of the anime. 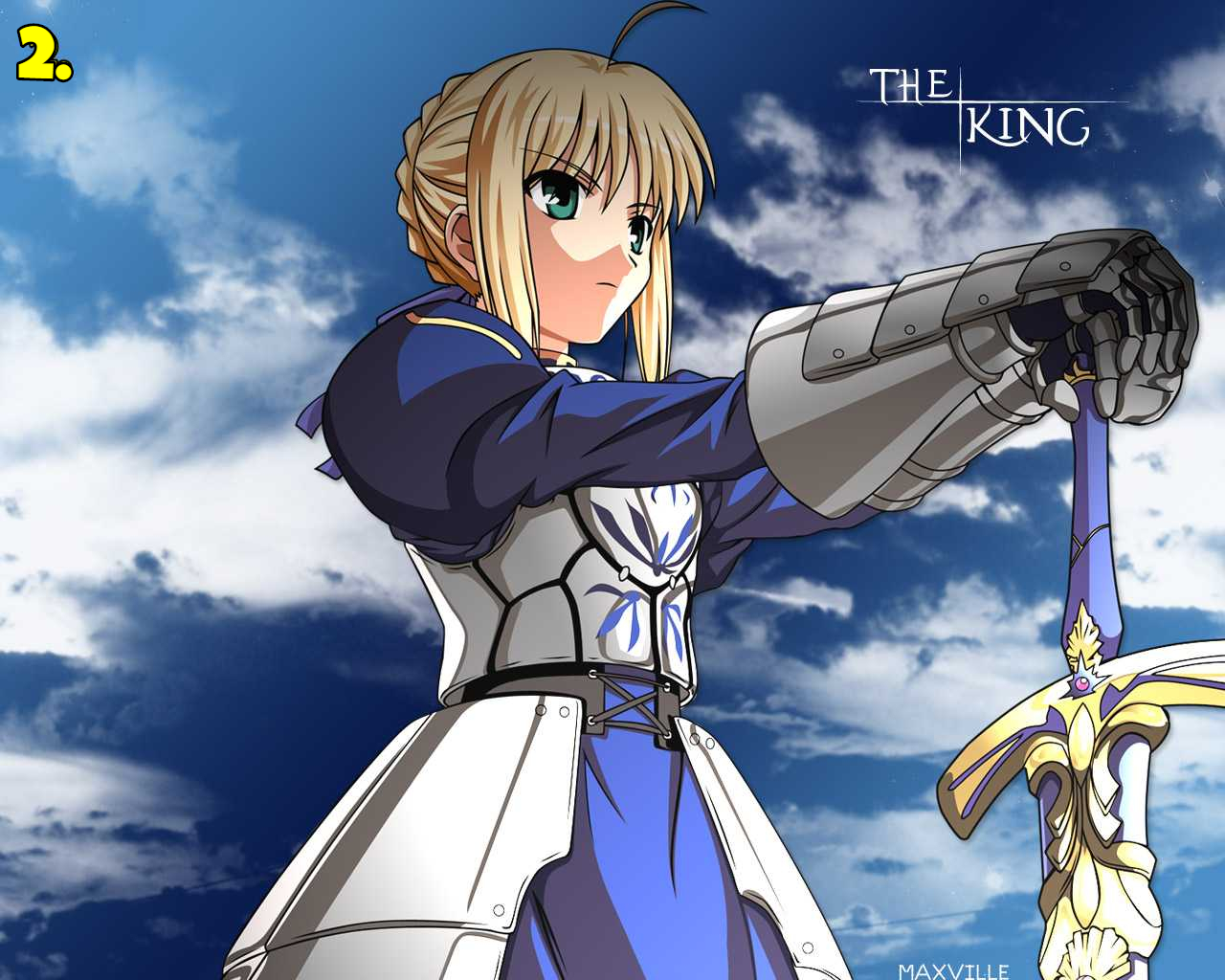 Saber happens to be one of the strong woman characters and a perfect blonde-haired warrior. She puts up a cold front and manages to hide her doubts and feelings. Her character has a feminine touch to it that makes her all the more desirable for the fans of her character. Her character has managed to leave thousands spellbound and the idea of creating a bold and beautiful character with some serious spunk makes her one of the most admired female characters in the world of anime. 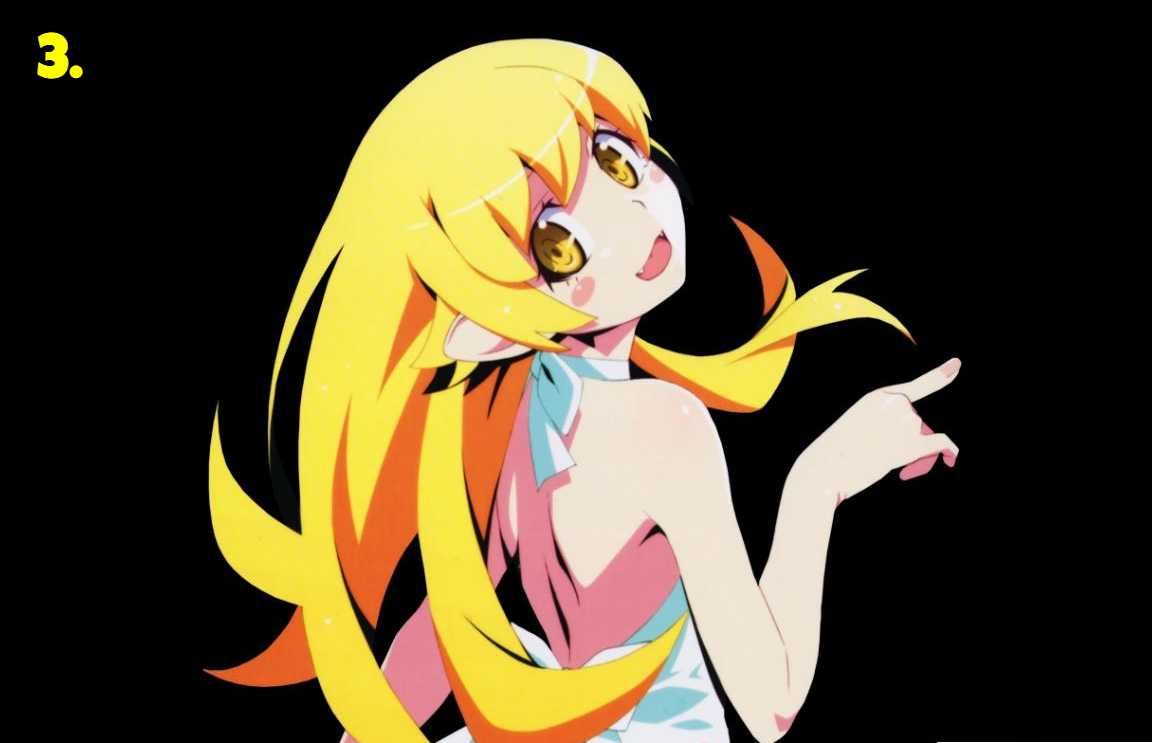 She featured in the anime called Bakemonogatari and is hailed as a very cute character in the show. Some of the distinctive features of this character are her beautiful and mischievous eyes along with her cute little fangs. She started off as a quiet character and soon the character developed into a more active side with the show Nisemonogatari. Her beautiful blonde hair is one of her main assets and adds to her cuteness and beauty.

4. Kaori Miyazono from Your Lie in April 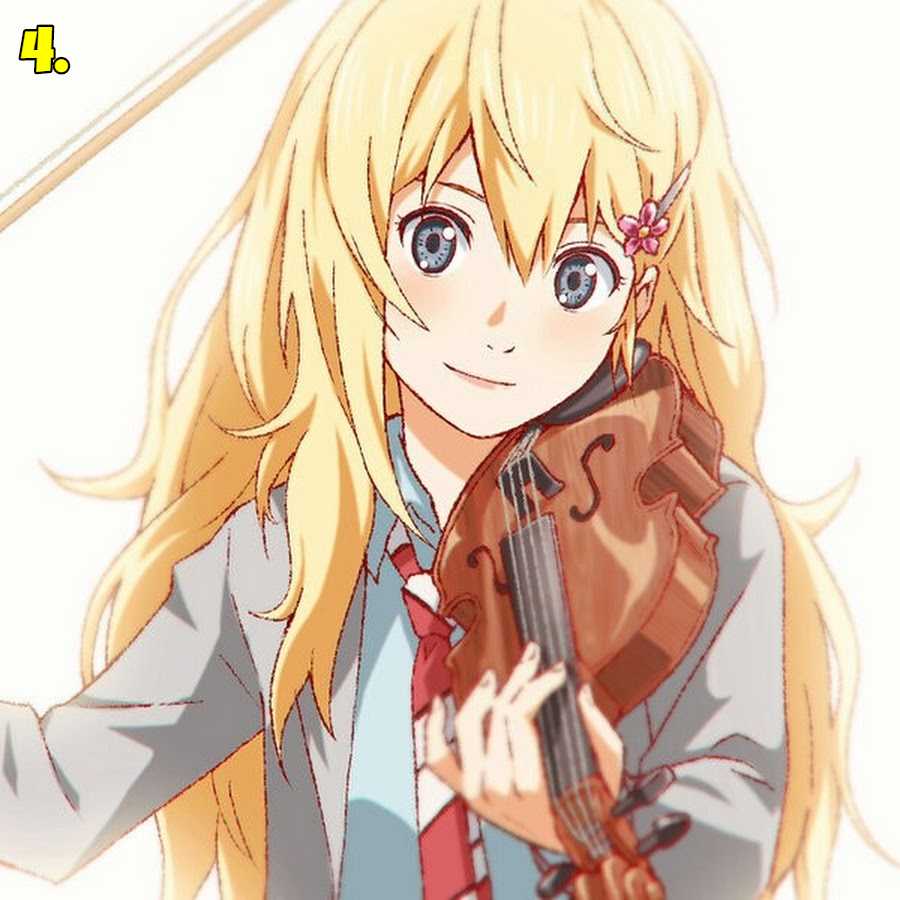 She is not only a pretty girl with beautiful blonde hair but this character from the anime Your Lie in April also has the characteristics which make her appearances win over the hearts of the fans. She has a positive personality and plays the violin which goes so well with her pleasant looks. Overall, Kaori Miyazono adds a wonderful vibe to the show and it is thus no wonder that is among the most popular blonde-haired beauties in the world of anime. 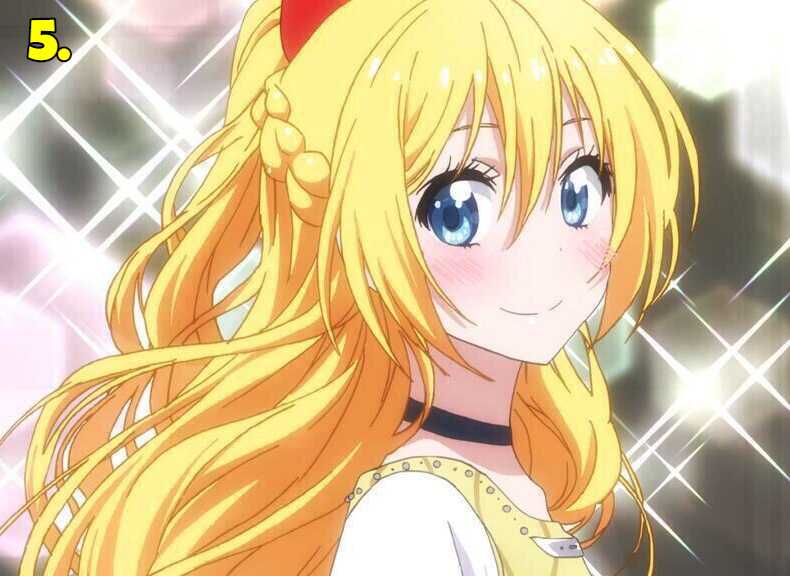 Chitoge Kirisaki has one of the most loveable personalities in the anime False Love. She comes across as someone who is not the most social person and does not have too many friends. But those who manage to overcome her barriers are greeted to a wonderful human being who loves the warmth and joy in regular life. Her flowing blonde hair and innocent face only adds to her cuteness and she is one of the pivotal characters in the anime. 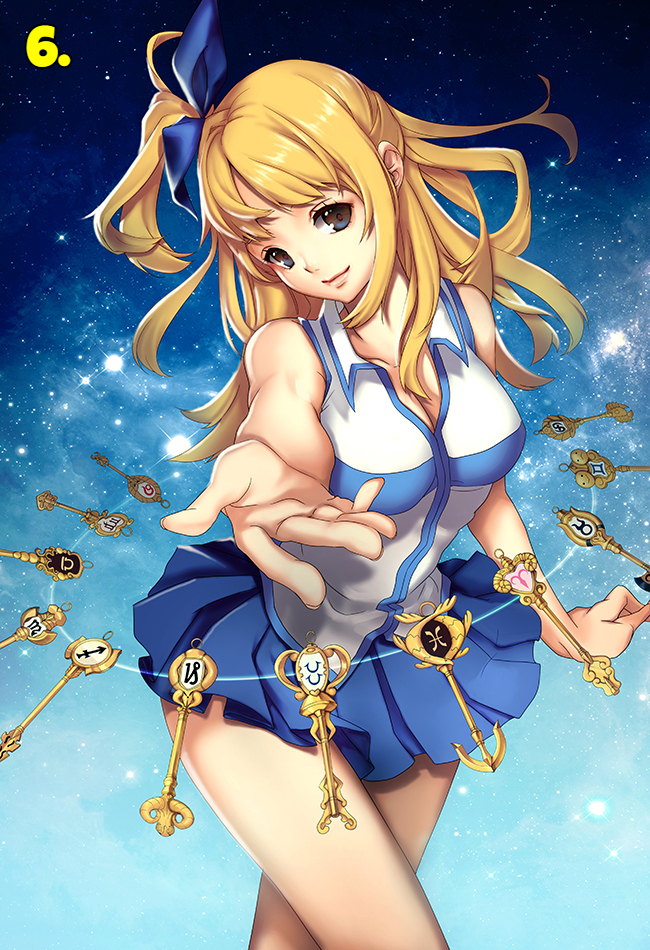 She has the most rational outlook and intelligence among the members of the Fairy Tail guild members. She is bold and beautiful and does not shy away from flaunting her beauty. Not only is her character an attractive lady, she is also one with brains and thus Lucy Heartfilia is among the favorites for many when it comes to the anime world.

7. Kirino Kuosaka from the anime My Little Sister Can’t Be This Cute

She plays the role of a younger sister in the anime and is one of those characters who try to hide their niceness by being rude and abusive. While it is difficult for the people around her to interact with her, she is still a nice person with a cute quotient. It only becomes visible when she does not try extra hard to be a rude girl. Kirino Kuosaka will surely make your hearts drool when you watch this anime. 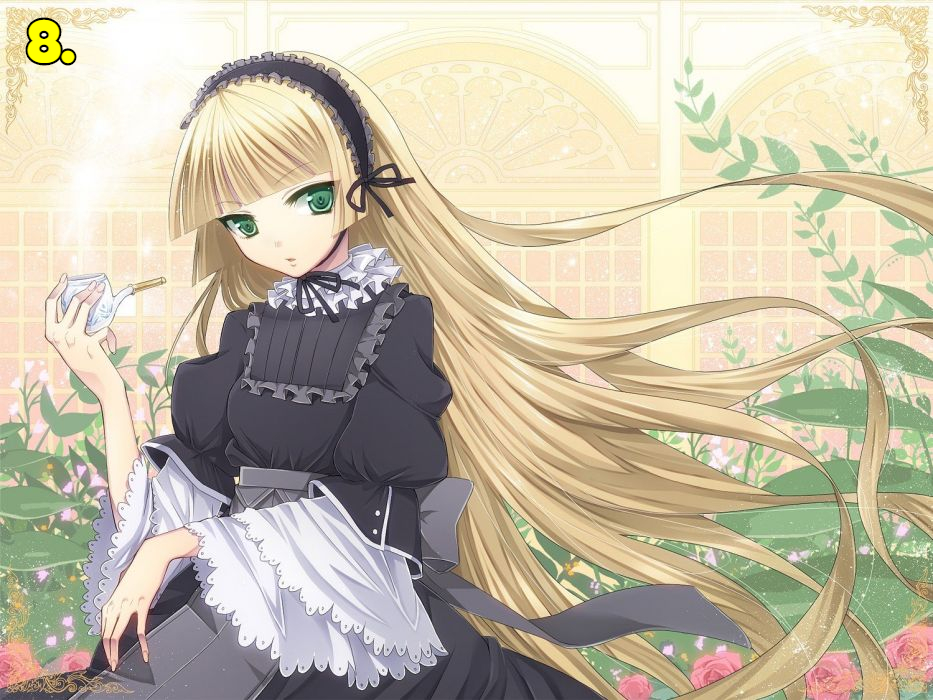 She is one of the most amazing female characters in the show and for good reason. Despite her appearance which is that of a simple cute blonde girl, she has some habits like smoking which belie her looks. She also has a voice which one would associate with a much elder person. Among her special talents, Victorique de Blois has stunning detective skills to go alongside her impressive appearance. She will catch your fancy and interest once you get introduced to this character. 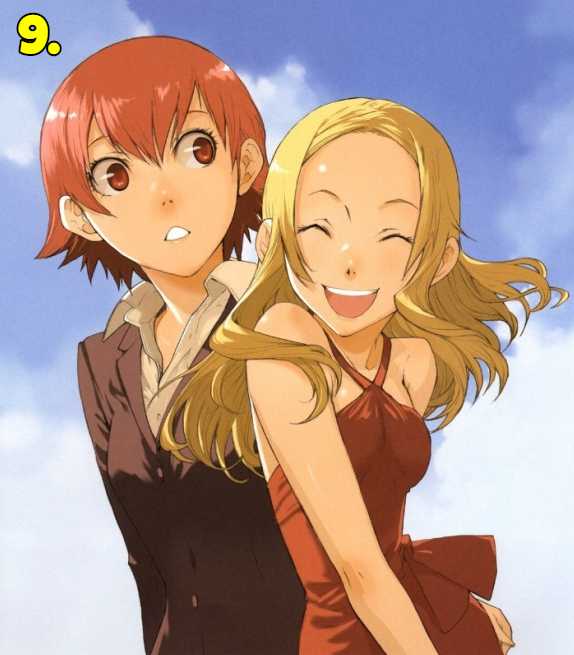 A thief is not usually a cute character if we think about it, but Miria Harvent makes an exception. With her flowing locks of blonde hair, this beautiful character has the sweetest nature and greets people with the best of manners. She has certain positivity to her character which is sure to bring a smile to your face. Her character is not the smartest and yet she is one of those people who have some naturally loveable traits to their character.

10. Teresa from the anime Claymore 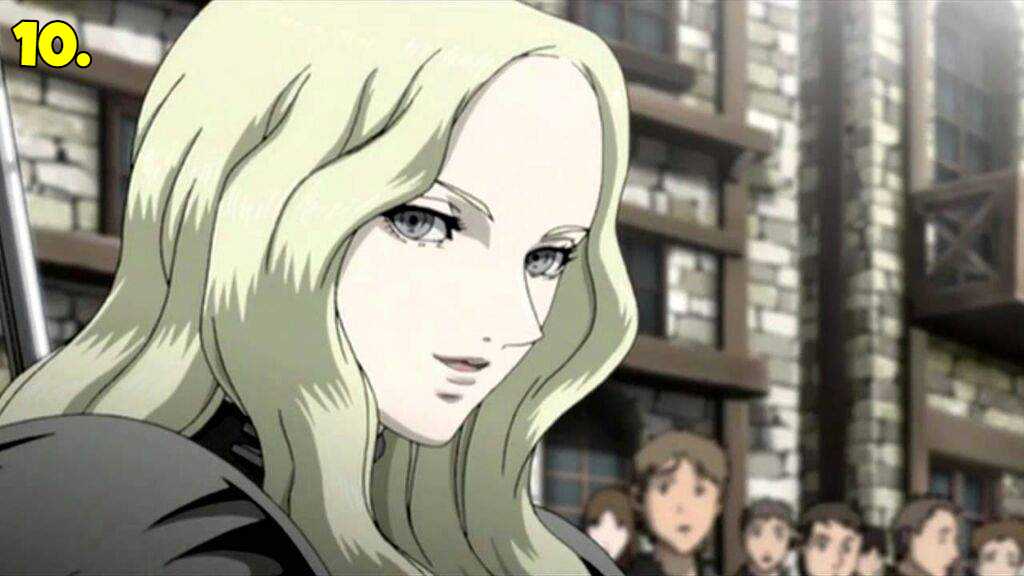 When you find motherly warmth in the character of a fierce warrior, you immediately find respect and love for the individual. That is all there is to the character of Teresa from the anime Claymore. She is a beautiful lady with stunning blonde hair and her appearance just adds to her glamour and glory. As a warrior she is relentless and yet she has the humanitarian side to her character which makes her so popular among the fans of the anime.

11. Tsumugi Kotobuki from the show K-On 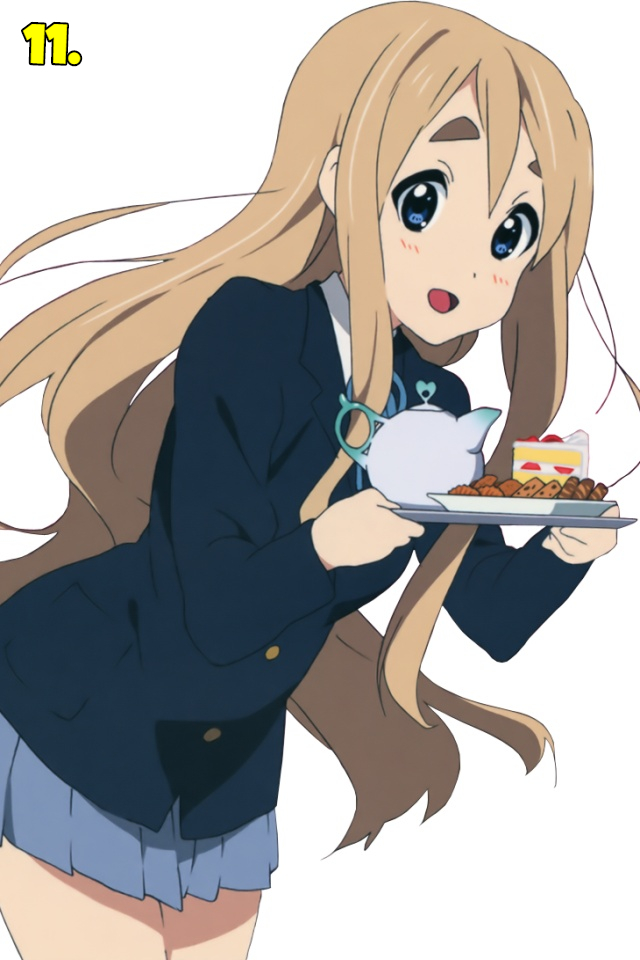 One could get stunned with the piano skills of Tsumugi Kotobuki who is fondly called Mugi. If that was not enough, she also has the cutest of appearances to melt your heart. This is a character with so much of warmth and positivity that you are going to be in love with her while you watch K-On. There is not a hint of pride for being a piano prodigy and she also has the most kind and gentle nature to win over people. 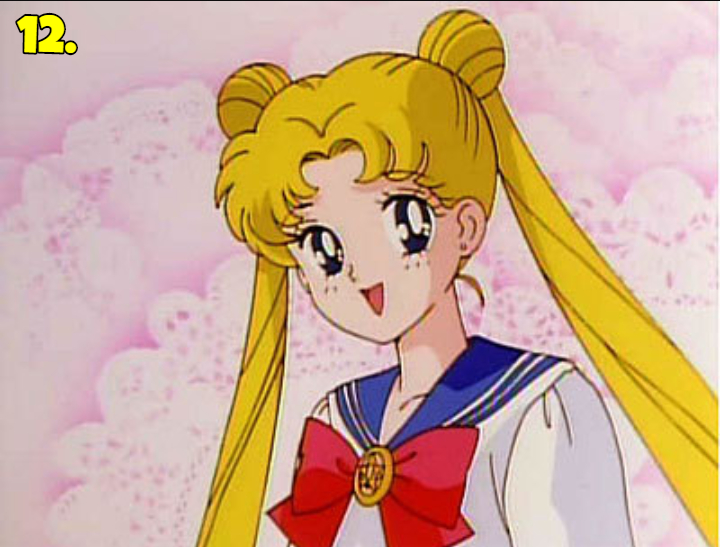 She has been a part of the anime titled Bishoujo Senshi Sailor Moon. When it comes to the evolution of a character, Usagi Tsukino would rank among the best. She started off as an individual who was more of a crybaby. Soon she hardened into a much tougher personality with a lot of added wisdom. Her personality was further glorified courtesy of her stunning beauty and her long blonde hair. Usagi Tsukino rules the hearts of anime lovers with her evergreen presence. 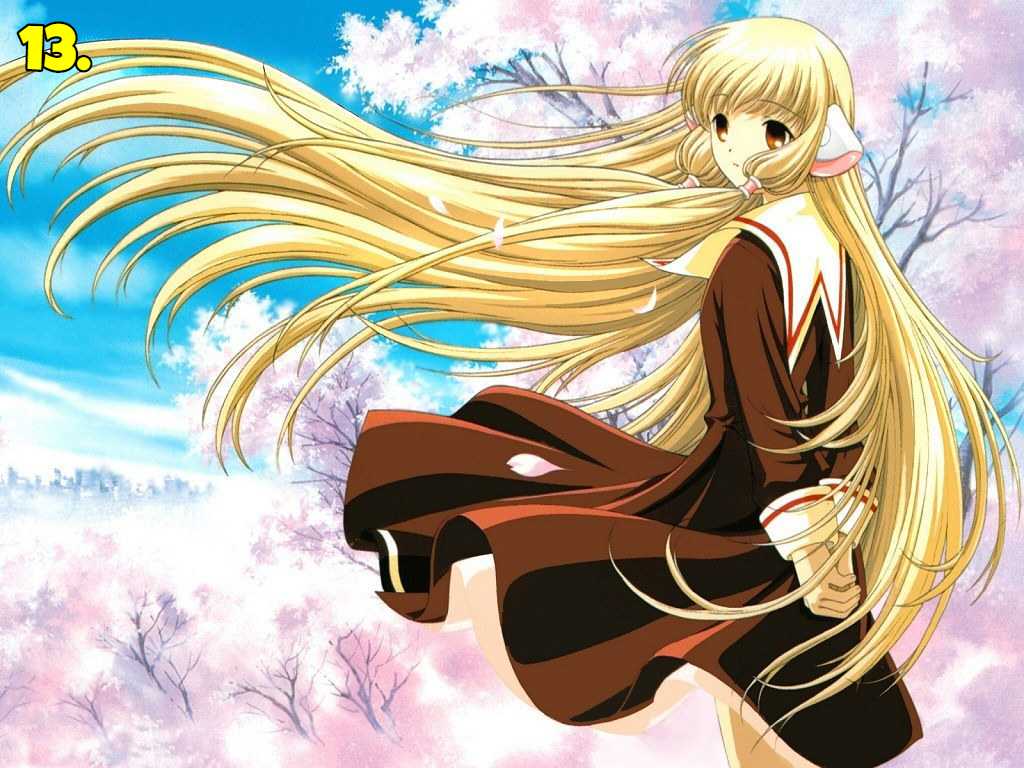 Chii is basically a Persocom which is nothing but a robot with a human-like appearance. Her appearance alone is enough to leave you droopy-eyed. She has beautiful round eyes and her ears protrude out of her face. The show starts off showing her inability to speak and communicate with others. Gradually she learns how to speak to the people who are close to her. Her human qualities make her loveable and her cuteness knows no bounds in this much-loved anime. 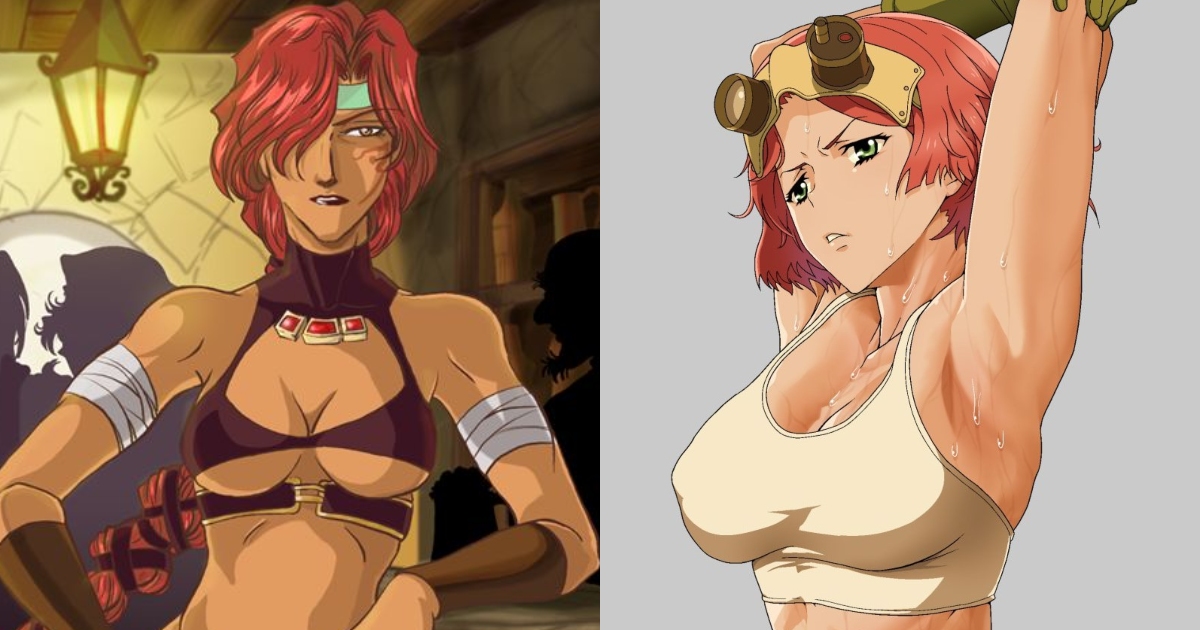 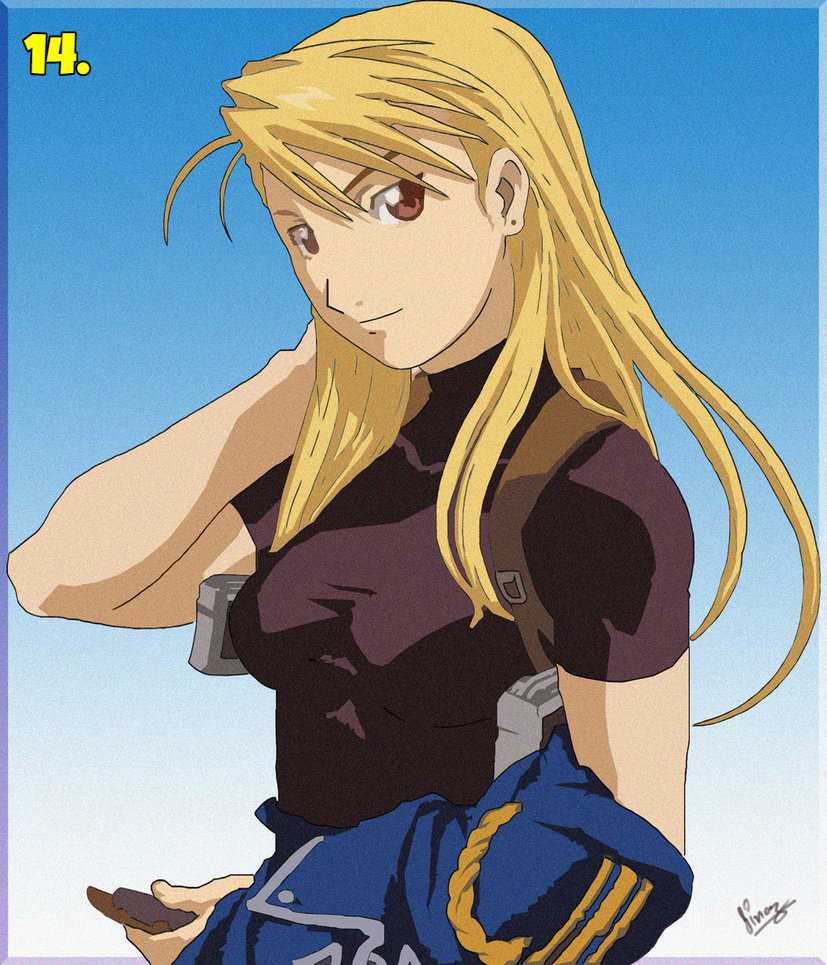 She is a blonde with a massive style quotient which enhances the personality of her character. Riza Hawkeye is a subordinate and plays the perfect assistant. While she oozes style and beauty, she is also very conscious regarding her self-respect. She is one of those individuals who would not take to a blonde-joke kindly and whisk out her twin pistols. This act is, in fact, one of the many stylish things that she does in this anime. Overall, Riza Hawkeye is loved and adored by the fans of Fullmetal Alchemist for her qualities and beauty. 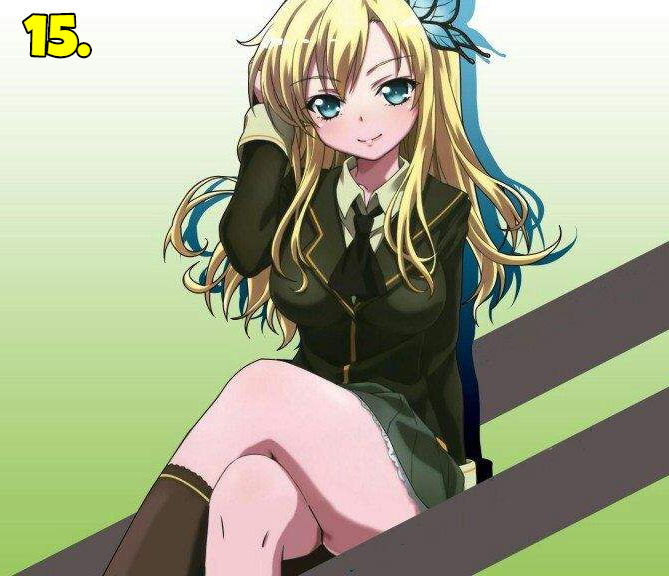 She has blue dreamy eyes and the perfect blonde hair to compliment her good looks. While the character of Sena Kashiwazaki is brilliant in terms of academics, she also happens to be an excellent gamer. Her male counterparts admire her gaming skills and drool over her beauty. She is, however, arrogant and not the most gentle character. Still, her character has a separate fan base and she is loved for her various qualities on the show. 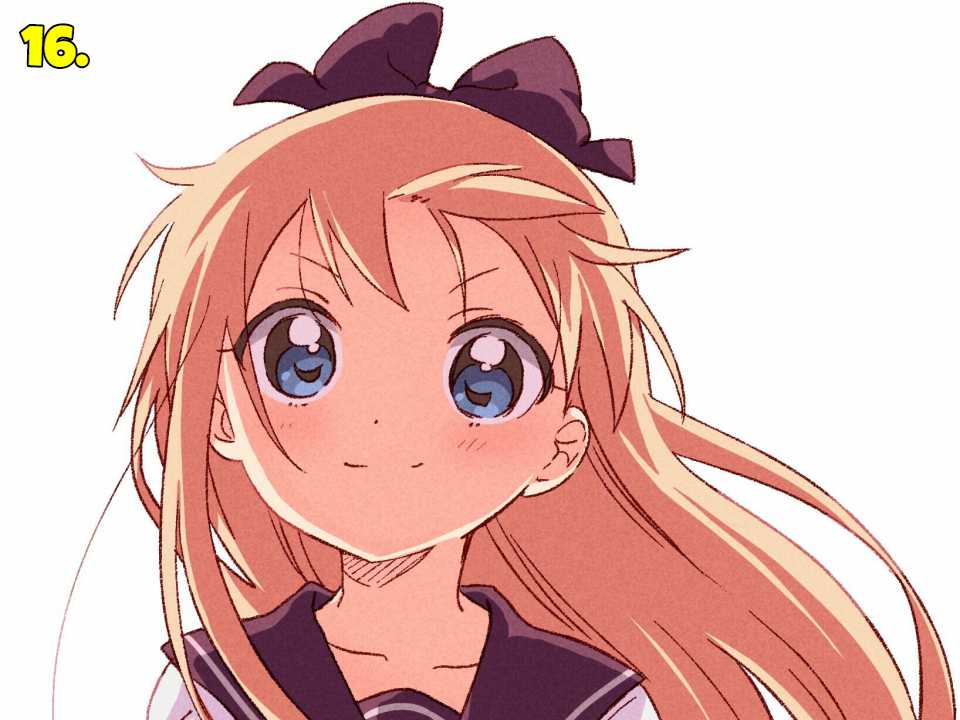 This adorable little 14-year-old girl is determined to keep up with her otaku ways. Even then, one cannot help but like this extremely loveable character. She brings in a whole new energy level to the anime and adds to the positivity of the show. Her cuteness is what makes the audiences love her despite her shortcomings. It is impossible to imagine Yuri Yuri without the presence of this eventful character.

25 Anime Girls Sexy Asses That Will Hypnotise You 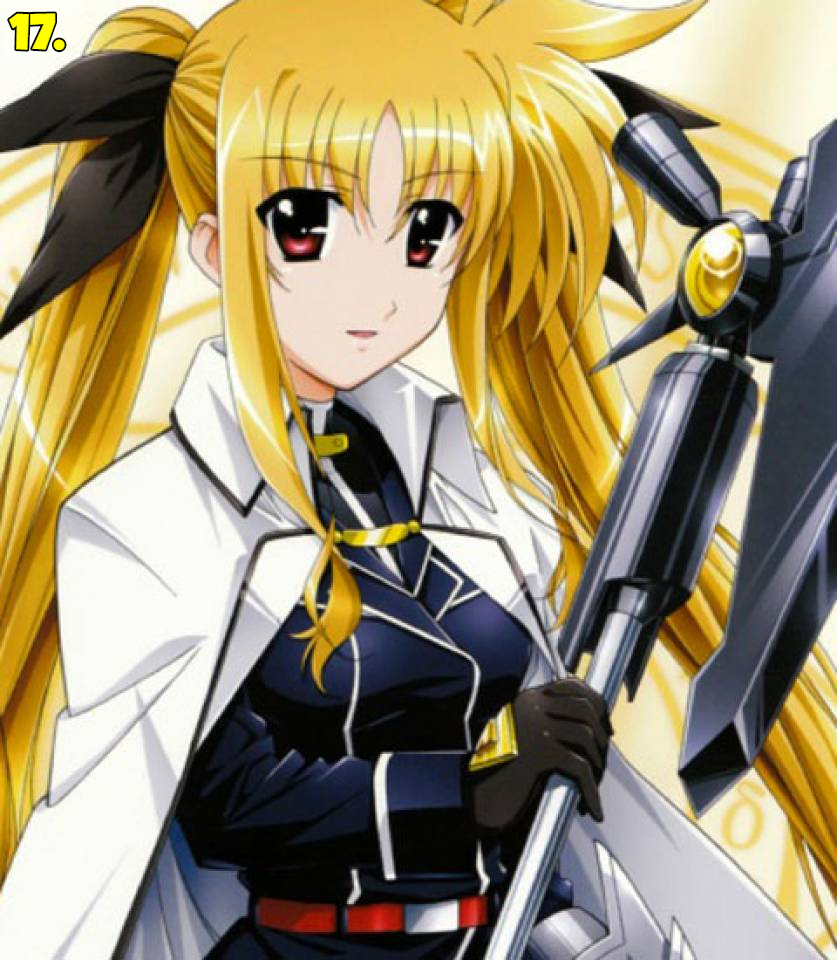 This wonderful character of Fate lights up the anime Magical Girl Lyrical Nanoha. She starts off during the initial phases of show as someone who is cold-hearted and stiff. Soon her character develops and her sweet nature comes to the fore. However, she is still a very strong-willed character and is known for her strong decisions. 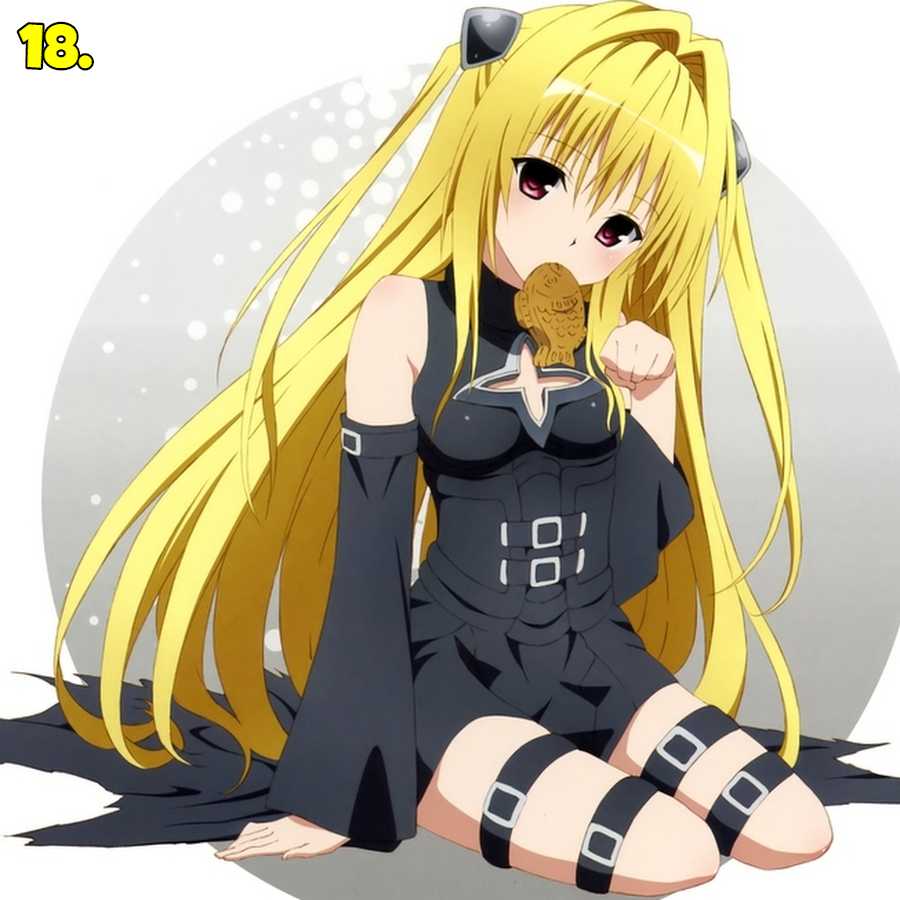 She is the perfect example of how one should not judge a book by its cover. Konjiki is a girl who has the prettiest of looks and long blonde hair which is her defining feature. However, she is a ruthless assassin who does not hesitate to kill. ‘ecchi’ people are in particular the kind of people she hates and she attacks them without the slightest hesitation. Her strength and powers are well disguised under the garb of her beautiful looks. 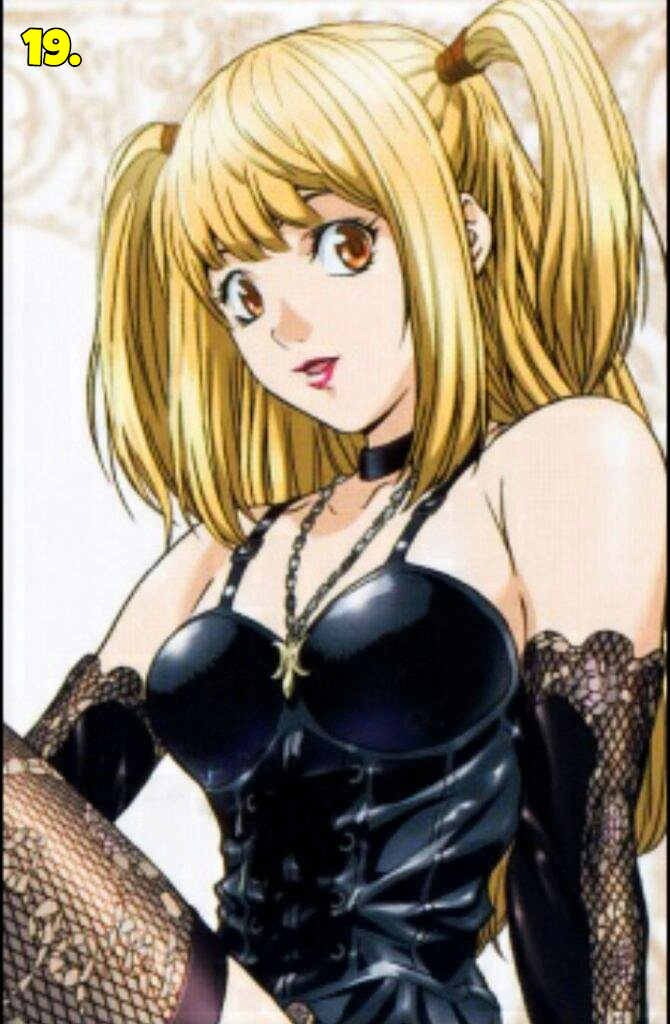 She is the perfect synthesis of beautiful looks and a good heart. Misa Amane is a sexy model but her dedication for Light Yagami is praiseworthy. She is willing to devote herself to him and can go to any extent to prove her love for him. Her character shows signs of being hyperactive and she is passionate about the mission of Light Yagami which is to eliminate the evil people from Earth. Her blonde locks are just an addition to her beauty but there is much more to her than just the looks. 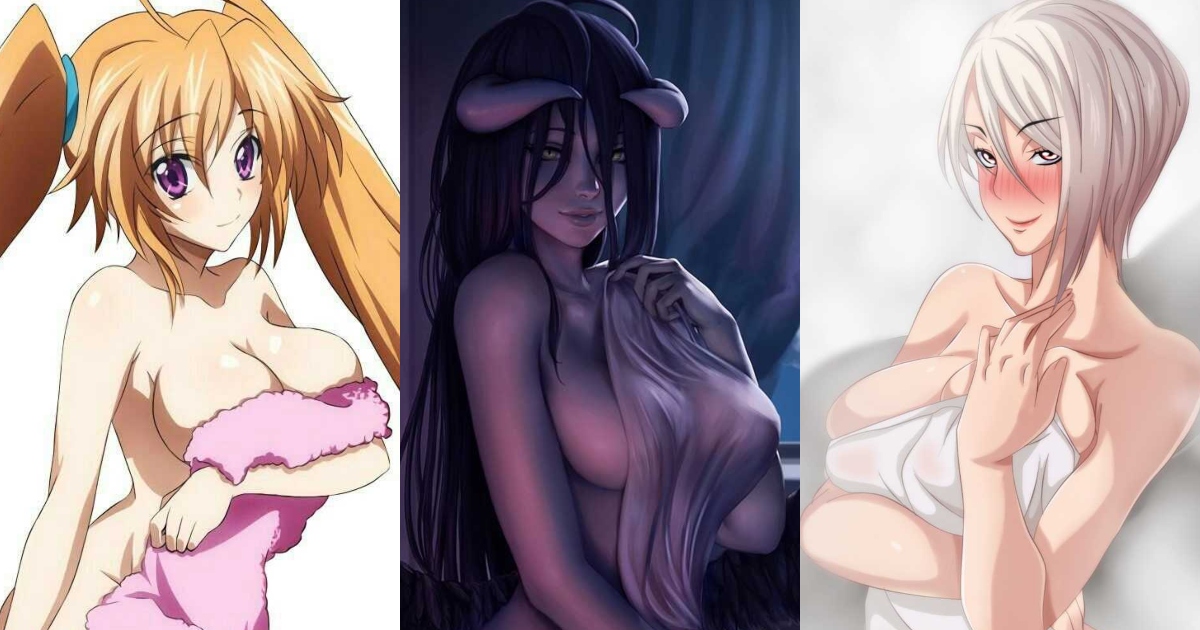 20. Seras Victoria from the anime Hellsing 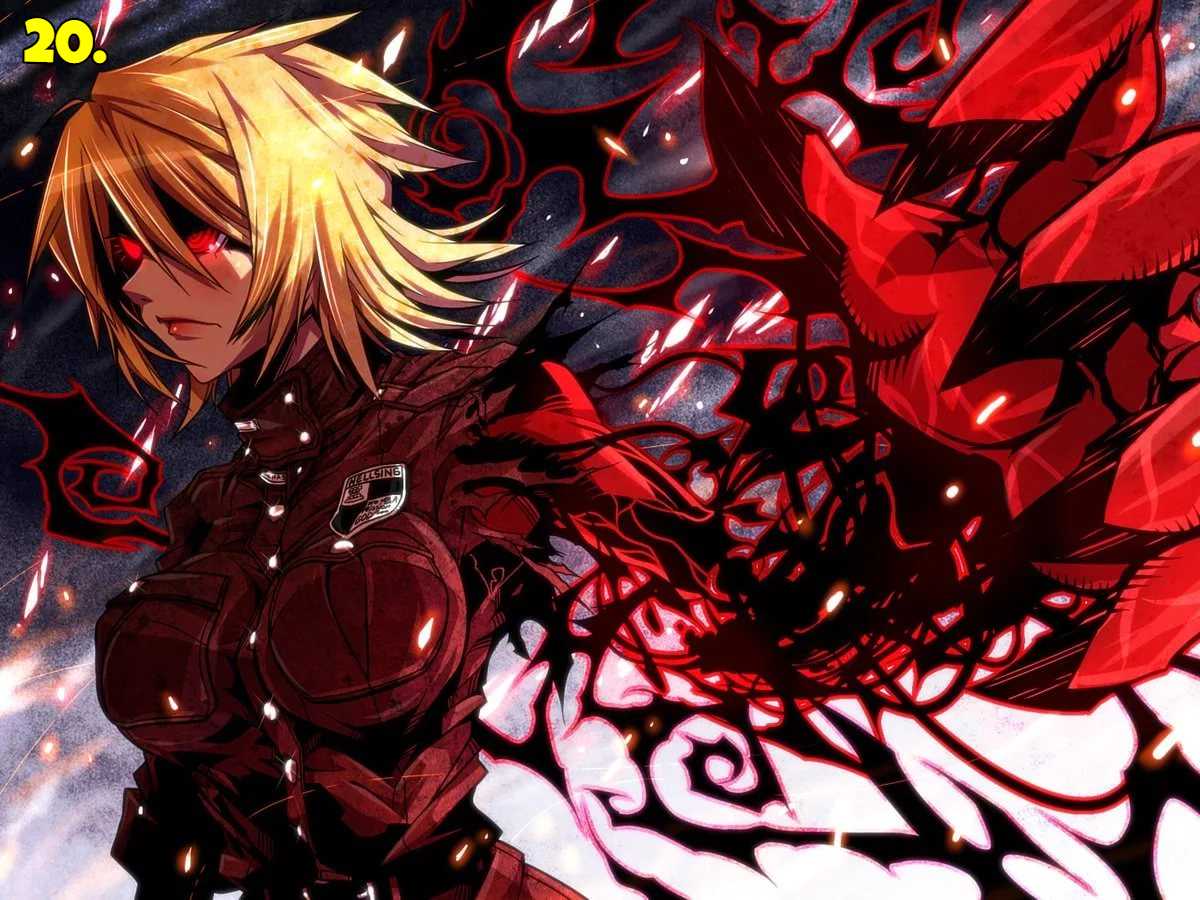 She is a blonde with multiple personalities. In general her character which is that of a policewoman is a tomboy. She minds her business till she is irked and turns into a psycho which is often scary. Some events happened such that it turned her into a vampire and there are several shades to her remarkable character. Seras Victoria does have the hotness quotient which makes her a desirable character for the fans of the show.

21. Margery Daw from Shakugan no Shana 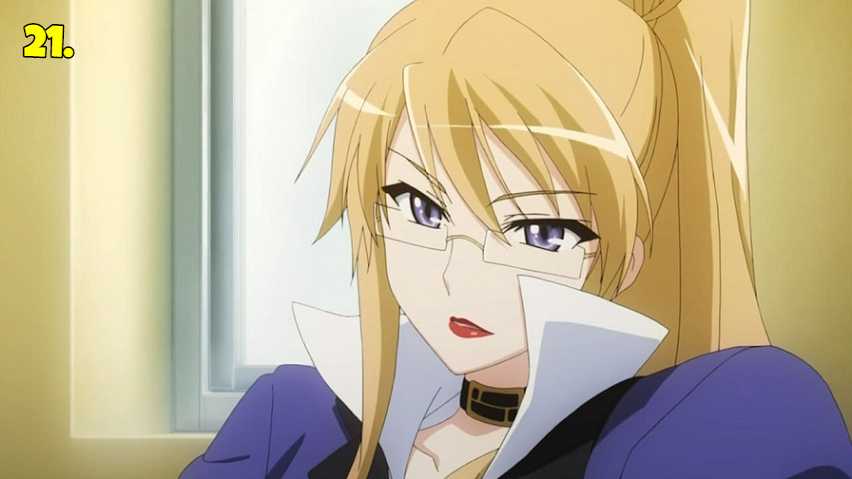 While she is a supporting character in the anime, Margery Daw surely makes the list of some of the most attractive blonde characters in the world of anime. She is drunk most of the time and there are some stunning fight sequences where she turns into a dangerous werewolf. She is a master of spells and her spell is extremely potent and makes her a powerful character. 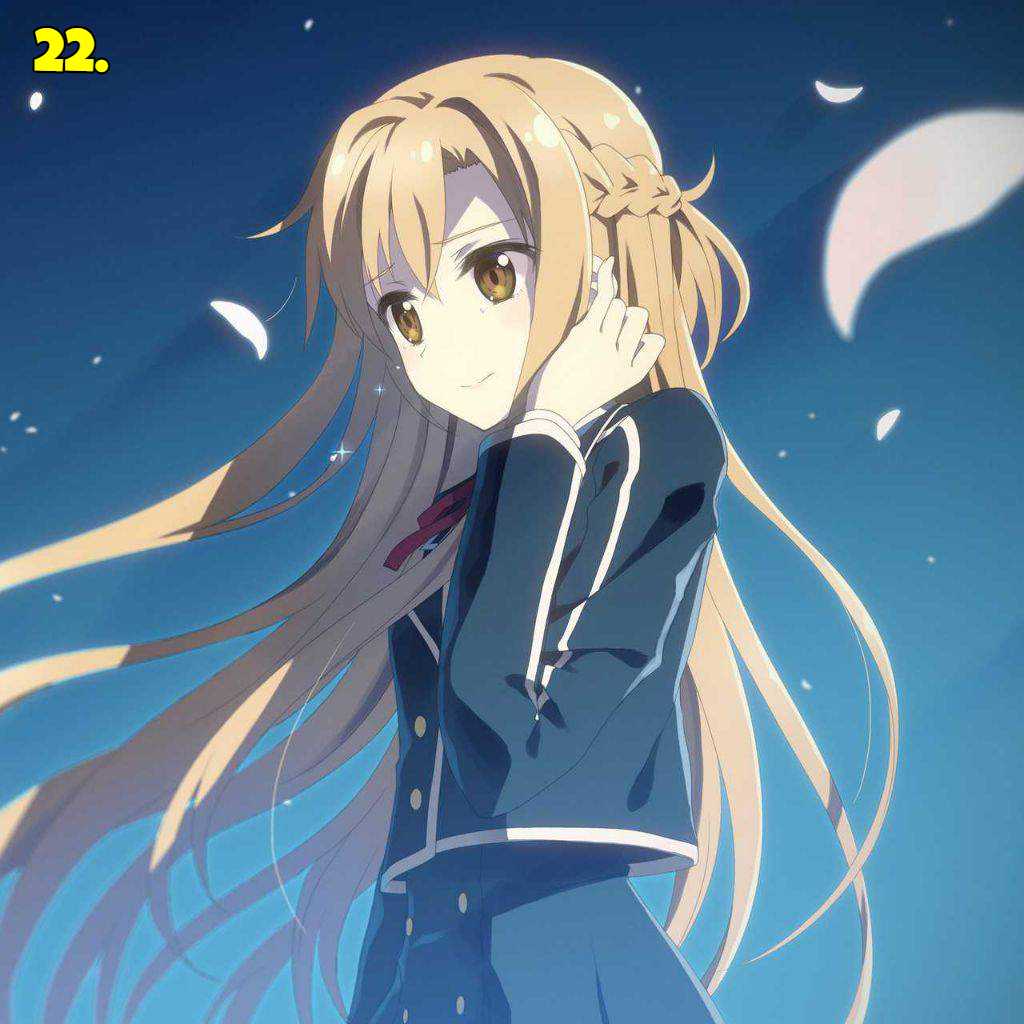 As one of the female leads in this wonderful anime, Asuna Yuuki impresses with the way her character develops with time. She is a beautiful and strong blonde who has great potential with the sword. As the anime progresses we see her realizing her potential to its fullest. At every stage of the anime, she proves her mettle as a determined and powerful warrior and she is a source of inspiration for those who love this anime.

The list is long and there are several who could not be accommodated still. The world of anime does have some more stunning blondes but these are the ones who would steal your hearts without a doubt. It is time to give these shows a try and experience the depths of all these wonderful characters.