Geeks on Coffee
More
Home GEEK AND NERDS Fans Have Caught Shawn Michaels Mouth ‘We’re Too Old For This’ To... 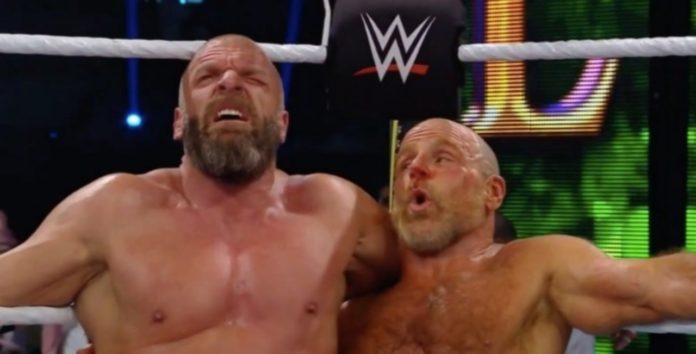 WWE Crown Jewel had just featured an Attitude Era exhibition, and the four combatants’ average age had been 51.5. After this match, Shawn Michaels had been caught saying something that surprised all the fans.

After he had beaten Kane, and The Undertaker, Triple H and Michaels had shared a ring corner for self-reflection, and we can see HBK tell Triple H “We’re too old for this.”

These words are true for Triple H, and he had been coming to terms with a torn pectoral. The Game had suffered this injury mid-match and seems down for surgery. Kane, Michaels, and Undertaker had left this match in good health.

There were many rumours about Michael regarding a few more matches being added to the slate. WrestleMania 35 and Whispers of Survivor Series are persistent, but they might not manifest. After the Crown Jewel match, HBK seemed to have shut the door on more in-ring competitions:

“This whole day I’ve been anxious, and nervous, and everything else,” Shawn had said.

“But once I got in there with everybody, it was fun; it was comfortable. I felt… did a few things, get a little warm, and you forget how tough this is on your body. I’ll be feeling it for the next several days, and it’ll be a very good reminder of why I didn’t do it for 8 years and why I’m not going to do it again if I can possibly help it.”

Michaels might have left a small opening for another match, but now, we guess that it is all over. At the age of 53, Michaels does not have a lot to prove to himself, and a few have expected him to break the decade-long retirement.

Before the Crown Jewel match, Michaels had spoken to WWE.com, and he seemed to have underlined that this will be the very last time the fans see him compete:

“… it’s sort of like saying yes to eating chocolate pie. Sometimes, you know, for the most part, you know it’s not as good for you, you try not to have too much of it, but every now and then, you have a cheat day, you enjoy it, and then that’s it. That’s what this is for me, it’s a very glorified cheat day,” he had said.

5 Actors We May Get To See In A “Starship Troopers”...