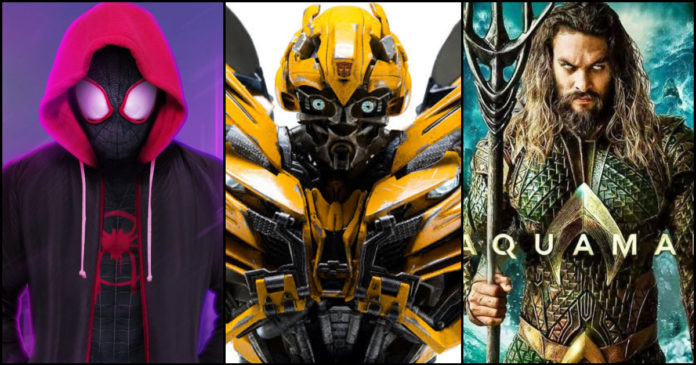 This year has been packed with many Blockbusters, and we can also say that 2018 has been dominated by mostly movies from the superhero genre. We are now in the month of October, and although there are just two more months for the year to end, there are many films that all the fans will get to see before the curtains close on 2018.

1. The Nutcracker and the Four Realms

This movie is about Mackenzie Foy’s character, and also stars Morgan Freeman and Keira Knightley. The magical adventure will come to life by November 2.

DON’T MISS: 7 Upcoming Hollywood Movies Which Will Release By November, 2018

Rami Malek will star as Freddie Mercury, and the movie is a celebration of Queen. It will be directed by Brian Singer and will release on November 2.

3. The Girl in the Spider’s Web: A New Dragon Tattoo Story

This sequel to A Girl with the Dragon Tattoo will star the actress, Claire Foy as the character, Superhacker Lisbeth Salander and also Sverrir Gudnason as Mikael Blomkvist. These characters find themselves in between a web of cybercriminals, corrupt governments and spies. The movie will release on November 9.

4. Fantastic Beasts: The Crimes of Grindelwald

The very first Fantastic Beasts film had revealed that Johnny Depp’s character was the real baddie and this sequel will continue telling the story of Grindelwald. This movie will release on November 16.

The film’s trailers have had all the fans super excited, and it will be about a war-hardened crusader who eventually joins forces with a Moorish commander for revolting against a corrupt English crown. The movie will release on November 21.

The movie will be a huge event and will bring many properties of Disney on one screen. The movie stars John C. Reilly as Wreck-It Ralph, and the character will be seen exploring the expansive and exciting internet. The movie will release on November 21.

Apollo Creed’s son played by Michael B Jordon will reprise his role in this film with Sylvester Stallone’s Rocky Balboa who will be his coach. The movie will release on November 21.

8. Spider-Man: Into the Spider-verse

This Spider-Man movie will establish a Spider-verse where Peter Parker is not the only Web Slinger, and Miles Morales has also taken up the mantle. This movie will release on December 13.

The movie comes from Universal Studios and will be directed by Christian Rivers. This movie will be about a mysterious woman, Hester Shaw (Hera Hilmar) who will be the only person that can stop London which is a city on wheels. The movie releases on December 13.

Michael now has three children and Poppins will be helping the siblings remember the wonder and joy of life that they had when they were kids. This movie will release on December 19.

DON’T MISS: 26 Reel Locations That Fans Have Spotted From The MCU Movies

This will be the last installment of the franchise. This stand-alone movie will bring together Bumblebee, John Cena and Autobot. The movie will release on December 21.

This is a very anticipated DC movie and is directed by James Wan.

The movie will show Arthur bridging the gap between the Atlanteans and the people who live above the water surface.

The movie will release on December 21.