Geeks on Coffee
More
Home STAR WARS The Father Of Anakin Skywalker Has Been Revealed And The Fans Are... 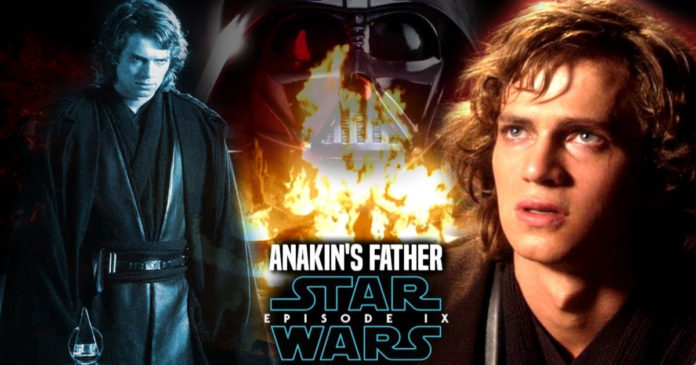 The mystery surrounding Anakin Skywalker’s birth has now been solved, and this as confirmed who had been responsible for the character’s mother’s pregnancy, and this has also changed the Star Wars mythology.

This revelation had landed in the Darth Vader comic book and had proven a long-held fan theory true. Since the Star Wars films have moved into the future of this Skywalker legacy and had taken Luke back into the Force, it looks like the perfect time to find out how the Force had brought Anakin into being.

1. ANAKIN’S MOTHER HAD CLAIMED THERE WAS NO FATHER

When Qui-Gon Jinn had sensed the greatest “vergence of the Force” ever in a young slave boy on a backwoods world, he had asked the most obvious question-who is the child’s father?

“There was no father. I carried him; I gave birth, I raised him, I can’t explain what happened.” In the world of Star Wars, a variation on a “virgin birth” is a huge development, and Qui-Gon had known to bring the child back to the cradle of the Jedi. 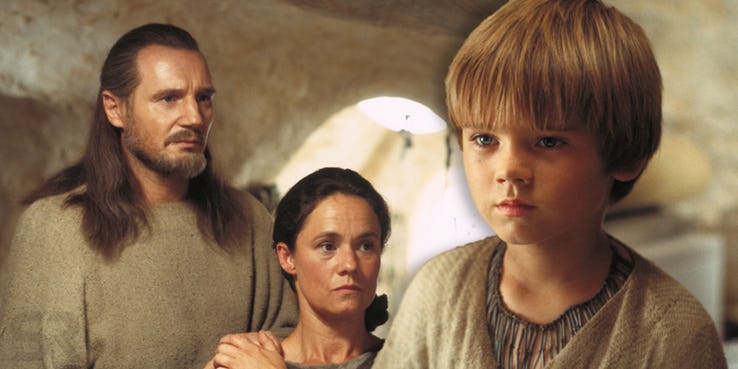 2. QUI-GON SAID THAT THE FORCE HAD CREATED ANAKIN

The creation of Anakin involves the Midi-chlorians- these microscopic beings responsible for a creature’s sensitivity to the Force are as much of a problem as they are made. Whether the Force is an ‘energy field’ that connects life forms or the effect of microscopic beings linking life forms, the result is the very same. Qui-Gon had judged that the one way Anakin Skywalker can possess the concentration of Midi-chlorians had been if they had created him themselves, inside Shmi Skywalker. This makes Anakin the Chosen One. This had been Qui-Gon’s theory, and it had been left as the only explanation. Many theories had risen in expanded universe novels, like the linking of Anakin’s conception to the Sith Lords, rather than the Midi-chlorians. Qui-Gon had been as deceived as all the Jedi Council and The Midi-chlorians might have been used for creating Anakin Skywalker. Anakin Skywalker had been created by the manipulation of the Dark Side of the Force, as many of the fans have expected, but the identity of the character’s ‘father’ guarantees that all the fans will never see the Star Wars saga the very same way. 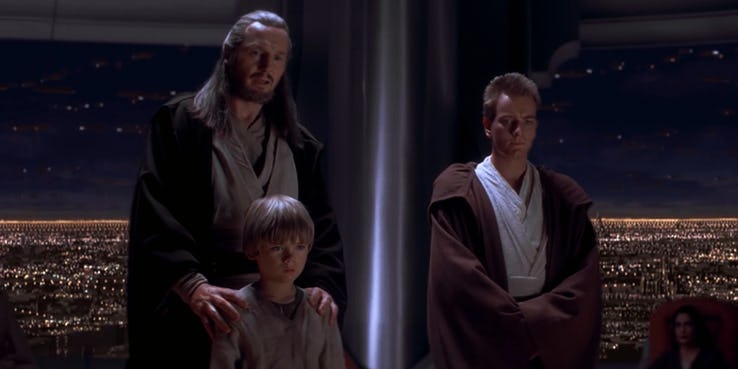 3. THE EMPEROR WAS ANAKIN’S ‘FATHER’

Darth Vader #25 had confirmed that Anakin Skywalker had been the result of Dark Side/Midi-chlorian manipulation in Shmi Skywalker and this had been performed by Emperor Palpatine. As all the fans who have been reading this Darth Vader series would know, Giuseppe Camuncoli and Charles Soule have been rolling out many changes to the Star Wars canon. Explaining that Darth Vader had built his castle for saving Padmé Amidala, the latest issue had shown Vader succeed in his mission to tear a hole between the realm of life, and the living Force. After entering, Vader had re-lived the most crucial moments of his life. He had then seen his mother during her pregnancy with Darth Sidious’ arms around her. 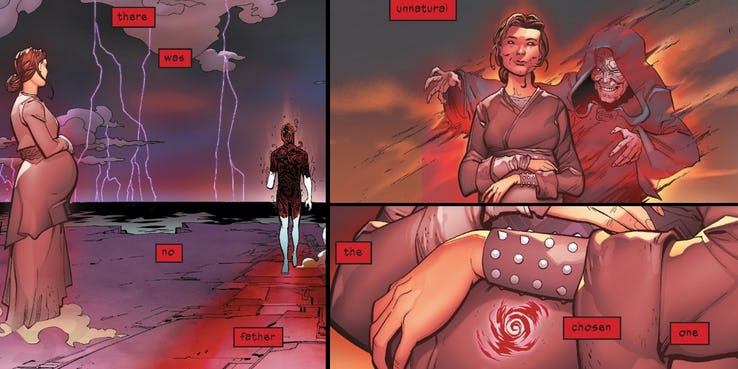 4. THE SITH HAD CREATED THE CHOSEN ONE

Since Chancellor Palpatine had informed Anakin about the story of Darth Plagueis the Wise, and the mastery over life and death, all the fans had theorised and also speculated that George Lucas had been hinting at something way more than just fairy tales. The tale of the Sith Lord who had learned to manipulate Midi-chlorians for creating life and the Apprentice who had killed him had been much more than it actually seemed. Anakin had heard that he could keep his wife alive via the Dark Side, but all the fans had heard Darth Sidious having confirmed that he had killed his master after he had learned the same power to create life.

The looks at Anakin Skywalker had been the evidence that the fans had needed, and in the Darth Plagueis novel (James Luceno), the tale had been laid out, but had been cloaked in many vague details and also presumed connections. This story had suggested that Darth Sidious and Darth Plagueis had reached out via the Force, to try to create a child that they could use as a weapon, but the Midi-chlorians, having sensed the effort foiled the plans for creating a child that could bring about the end of the Sith. 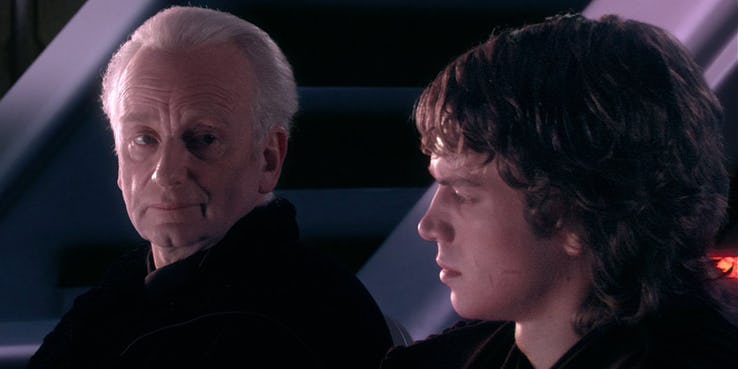 This same attempt to massage the tale of Darth Plagueis into canon may be at work here, even if the comic books show that Emperor Palpatine had a more personal role in this manipulation of the Midi-chlorians for creating Anakin. This passage from Darth Plagueis where Count Dooku informs Palpatine of Qui-Gon’s discovery reads very different in the new context:

“Qui-Gon returned from Tatooine with a former slave boy. According to the boy’s mother, the boy had no father… Perhaps conceived by the Force. As Qui-Gon believes.”

Palpatine’s head snapped back… “Does this have something to do with the prophecy you spoke of?”

“Everything. Qui-Gon believes that the boy-Anakin is his name-stands at the centre of a vergence in the Force, and believes further that his finding him was the will of the Force. Blood tests were apparently performed, and the boy’s concentration of midi-chlorians is unprecedented.” 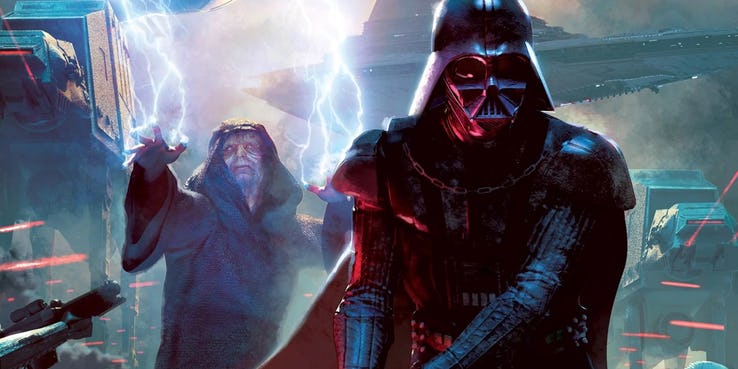 “What is known about this Anakin?”

“Very little, except for the fact that he was born into slavery nine years ago and was, until recently, along with his mother, the property of Gardulla the Hutt, then a Toydarian junk dealer,” Dooku smirked. “Also that he won the Boonta Eve Classic Podrace.”

Nine years old… Conceived by the Force… Is it possible…

Top 30 Most Expensive Bourbon Bottles in the World – 2020

The Bourbon industry shows no sign of slowing down due to the rising demand from the new generation of bourbon lovers. Many are still...
Read more