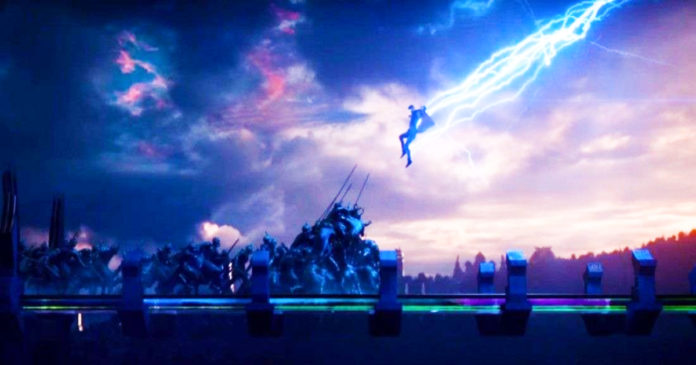 No matter what any of the Avengers can do, Thor is capable of doing it better. He is the strongest Avenger, and he knows how to steal the show, and that’s the reason he is the God of Thunder. Therefore, here we present to you the legendary entrances of Thor because he is a superhero who deserves even more applause.

We advise you to play Thor’s theme song as you read this article since this song is the best Thor song courtesy of Ragnarok.

The entry that Thor had in Wakanda is by far the best entrance ever given to a character in any film. If you had been in a theater watching the film, you would have been witness to the loud cheers that his entrance was greeted with. All the present warriors, Captain America, Black Panther, Bruce Banner and others were getting overwhelmed by the Outriders, and they were finding it difficult to fight.

That’s when the hero arrived on the scene to turn the tides (not exactly, but, at least momentarily it felt that the good guys would win now), and the lightning blue ax sliced through the Outriders, protecting the other Avengers. When the Stormbreaker went back to Thor as he stands with Rocket and Groot, that was truly a goosebump moment!

Here was a guy who had lost everything and was nearly killed by Thanos, so he is there to take revenge and he says ‘Bring me, Thanos.’

Despite being one-eyed, Thor made the perfect landing!

There is no doubt that Raganork is among the best films ever by Marvel or may be the best one and despite being extremely funny, the film didn’t compromise on the action and superhero battles.

During his battle with his evil sister and trying to protect the people of Asgard, Thor showed us his best battle skills and the ‘Immigrant Song’ in the background made it all incredibly awesome.

Thor can be trusted to add that extra dash of drama. In fact, we have been talking about Thor’s entrances, but, even bigger star was the late Mjolnir as it generally preceded Thor. The film starts with Thor and his friends/warriors Fandral, Volstagg and Sif battling invaders on Vanaheim, as the ultimate battle in a war to restore peace to the Nine Realms after the reconstruction of the Bifrost.

We know what you must be thinking! Agreed, Thor: The Dark World was a bad film, but, Thor still made an impression.

We couldn’t ignore the dramatic kick-ass entry he made in front of Malekith.

This one is about Thor’s first interaction with Captain America, Iron-Man, and Black Widow.

His hair looked so silky that we wondered if it was a movie scene or a shampoo advertisement.

However, what makes this scene memorable is Captain’s dialogue “There’s only one God ma’am, and I’m pretty sure he doesn’t dress like that.”

Will We See Quicksilver In The Avengers 4 Movie?