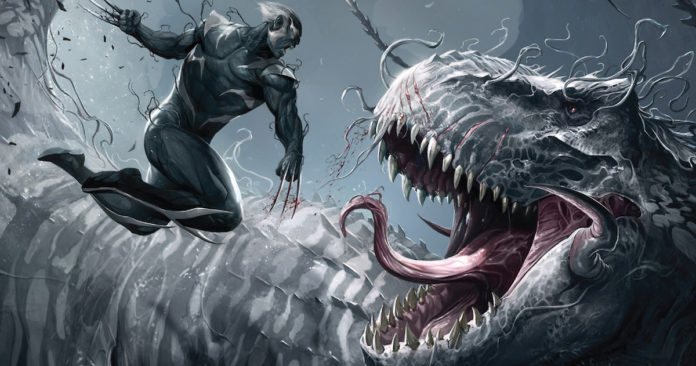 Sony will reintroduce Venom to the moviegoers in October. Now that the joint work between Sony and Marvel has led to a reboot of the Spider-Man, Sony is aiming to create a Spider-Verse minus the web-slinger, and there couldn’t have been a better way to start than to bring back Venom. The film is reportedly going to be inspired by the Lethal Protector narrative of the comics.

However, Eddie Brock is not the only Spider-Man version to host Venom. He was neither the first nor will he be the last. At times, there were other versions of Venom which turned out to be much better than Eddie Brock and here we will take a look at 5 of them.

In this case, the symbiote is not hosted by either the strongest or the most famous hero or villain. What makes this Venom awesome is that it is a cool creature that hosts Venom. In the Old Man Logan series, there was a Venom who appeared briefly, but, the impression it made has stayed on.

This was what we could call a Venom-Saurus Rex. In the future, where only very few heroes survived, Venom got attached to a T-Rex. The dinosaur belonged to the Savage Land and had reappeared again in Old Man Hawkeye. 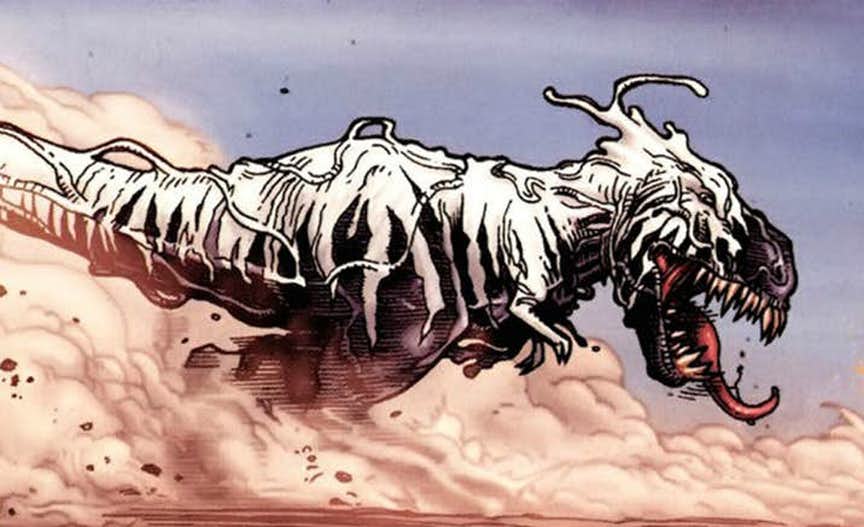 GUARDIANS OF THE GALAXY

Flash Thompson was sent to space by Captain America as a liaison to the Guardians of the Galaxy. However, upon reaching outer space, the symbiote discarded the Agent Venom armor, and the hive mind tried to reconnect with it. This made Venom hit out in anger.

That’s when it started getting attached to the different Guardians of the Galaxy members, from Groot to Drax to Rocket and tried to take control of their ship. The story becomes even more awesome as it extends to Venom’s home planet and reveals the reality of the symbiotes – peaceful beings who turn evil only if they attach to someone unstable. 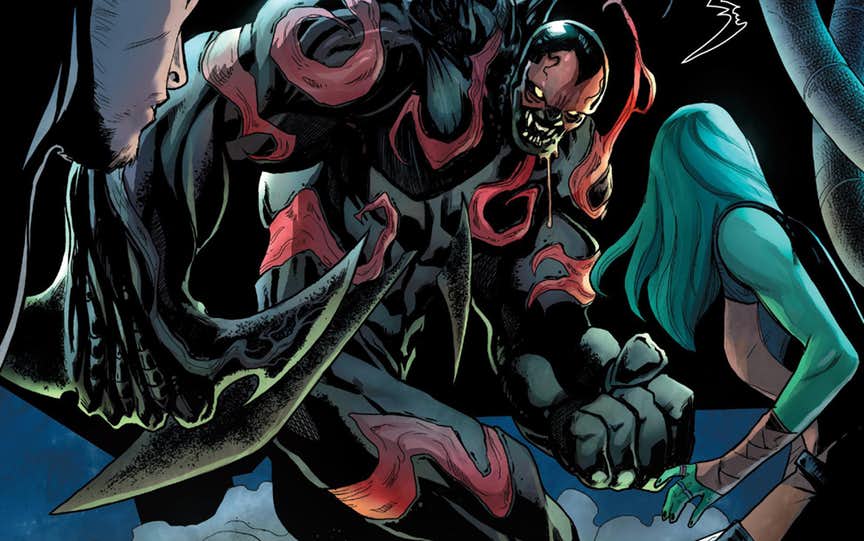 It won’t be wrong to say that Spider-Gwen enhances any story and this is something fans will find out when they watch Spider-Man: Into The Spider-Verse, later this year. In Spider-Gwen #25, she battled Venom from Earth-65. This Venom was the side-effect arising out of Matt Murdoch curing Harry Osborn of his Lizard problem.

Gwen managed to send her isotopes into Harry when he turned into the Lizard, and it resulted in the creation of the symbiote that went on to attach itself with Spider-Gwen. Soon Gwenom figured out that it was all a plan hatched by Matt Murdoch to show her in a villainous light. 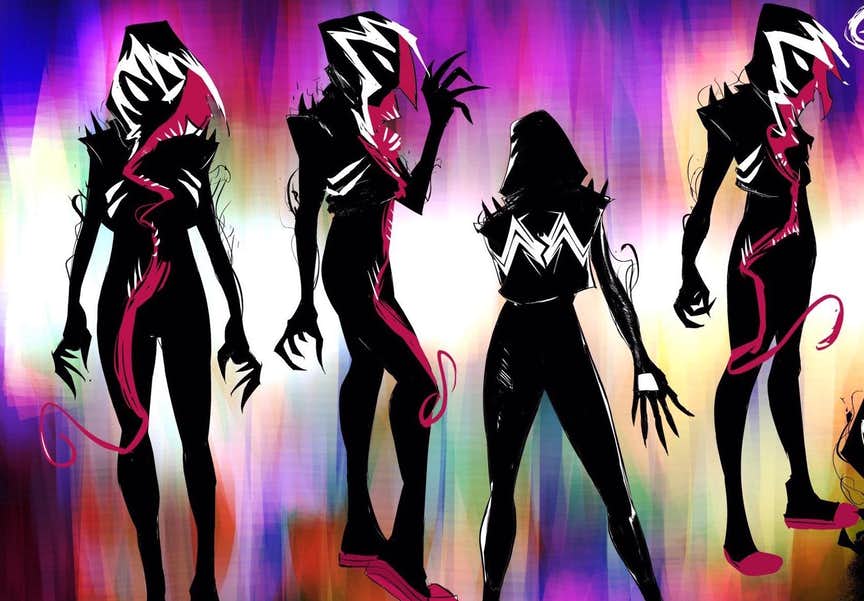 Back in 2016, Marvel came up with Back in Black series and in this series Deadpool claimed that long before Eddie Brock became Venom, the symbiote had come to him. Do you recall how Peter Parker had bonded with Venom in Secret Wars after the destruction of his costume? Deadpool also has a story to share about his Secret Wars.

After Peter Parker used the church bell to get rid of the Venom, the symbiote crawled around in search of love and acceptance and came across Deadpool. The Merc with a Mouth said that in Secret Wars, he had found the symbiote first, but, he didn’t want it and left it there for Spider-Man. Overall, this was a hilarious Deadpool story. 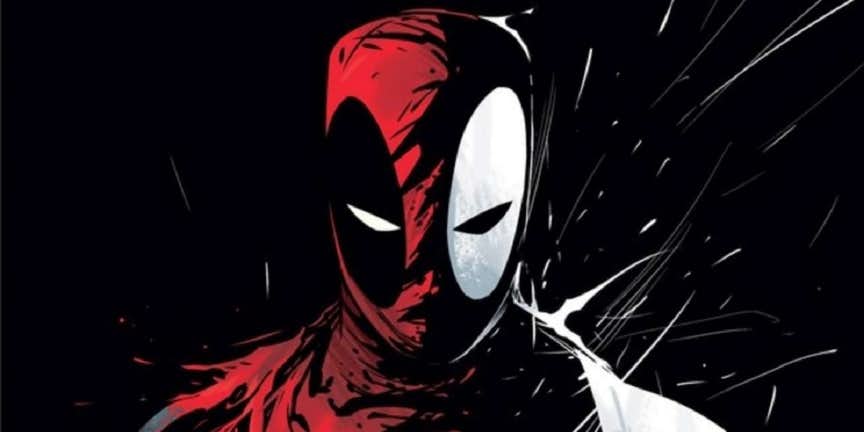 This might be the best symbiote attachment as Venom merged with the Red Hulk. The Circle of Four storyline resulted in a much cooler outcome than a mere Venomized Rd Hulk. The story might be nonsensical, but, there are a lot of reasons why this won’t work, but, it was too amazing to ignore.

Flash Thompson went AWOL, and Red Hulk was tasked to bring him back. That was also the time when Ghost Rider was chasing Blackheart who wanted to unleash Hell on Earth. Flash allowed Red Hulk to use the symbiote and he then merged with the Spirit of Vengeance too. The outcome was a Red Hulk with a burning skull and screaming “We Are Vengeance.” 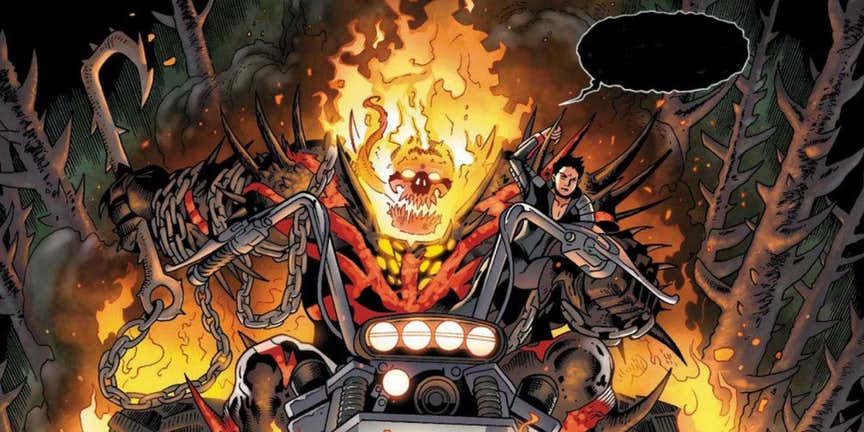 25 Hilarious BTS Images From Marvel Movies That Will Change The...